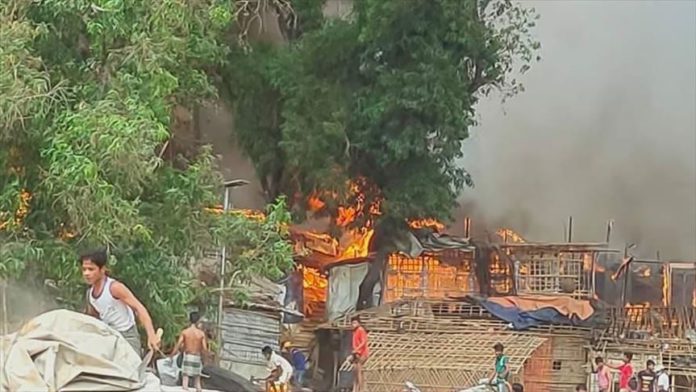 More than 670 makeshift dwellings for Rohingya refugees in a camp across Bangladesh’s southern district of Cox’s Bazar were damaged in a fire on Tuesday morning, according to officials.

No casualties were reported so far, he said. “The UNHCR [UN refugee agency] will repair the damaged tents soon.”

Speaking to Anadolu Agency, UNHCR communication officer in Bangladesh Louise Donovan said that a total of 312 shelters were destroyed, with 362 more partially damaged, as well as small shops and businesses.

“The UNHCR mobilized emergency response teams and coordinated with our partners,” she said, adding that Rohingya refugees themselves had been the first responders. “Thankfully, no loss of life has been reported.”

Rahmat Karim, a Rohingya victim whose house was also damaged in the incident, told Anadolu Agency that more than 500 houses had been damaged.

He said: “Five people of us have been wounded during the rescue works. Two or three people are still missing.”

Meanwhile, local media reports said that at least 100 makeshift tents were damaged in a fire at the Kutupalong Rohingya camp in Ukhia Upazila at around 9.00 a.m. local time [0300GMT].

Four firefighting units from Ukhia, Rampu, Teknaf and Cox’s Bazar rushed to the scene and were able to bring the blaze under control after two hours, the Daily Star newspaper reported, citing local fire department officials.

The fire might have originated from a gas cylinder, it said, adding that the extent of losses could not be assessed immediately.