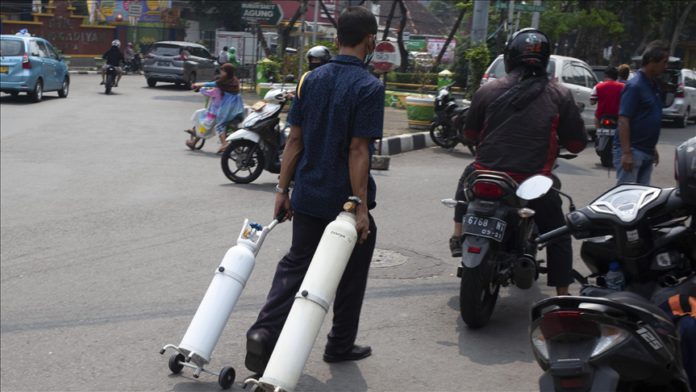 The oxygen supply at the COVID-19 hospitals in Bangladesh is feared to run out, while hospitals in the capital Dhaka are nearing a breaking point as a new peak has hit the country.

The country’s health officials said it would be difficult to address the demand for oxygen supply if the daily infections continue to remain around 7,000 for so many days.

The South Asian country of 165 million population, however, registered a record high 11,525 infections on Tuesday, taking the caseload to 966,406.

Some 163 people also died in the past 24 hours taking the death toll to 15,392, according to the Directorate General of Health Services (DGHS).

The country has a total of 1,217 incentive care unit (ICU) beds. Dhaka alone has 839 ICU beds, which has created a huge pressure on the capital and disparity among cities. Of the total, some 356 ICU beds were available as of Tuesday.

Belal Hossain Rahat, 30, a resident of the southwestern Jhenaidah district, told Anadolu Agency that both his father and mother developed breathing difficulties and high fever due to COVID-19 and are currently under treatment at their home.

There is no ICU facility at the Jhenaidah government district hospital, according to DGHS data.

“The existing poor and faint conditions in the district hospital have forced us to arrange their (parents’) treatment at home. We have already taken the necessary preparations. And, if their condition remains unchanged we will have to move to Dhaka for better treatment,” Rahat continued.

Referring to the current situation in the government hospitals at the districts level, DGHS spokesperson Dr. Nazmul Islam told Anadolu Agency that the doctor-patient ratio in Bangladesh is only 5.26 per 10,000 population — a gap in providing treatment.

Most specialized hospitals have been built in Dhaka and major cities. So, people often move to Dhaka for better treatment, he added.

“Till now, there is no serious oxygen supply crisis but if the infection figure continues to manifold and people need oxygen then it certainly will be difficult to address the demand,” he claimed, adding: “We have already prepared a procurement plan to reserve more oxygen at a number of hospitals.”

The DGHS said it has a capacity of providing about 210-220 tons of liquid oxygen daily. But experts and media reports estimated that the daily demand for oxygen has crossed 230 tons amid the surging infections since last week.