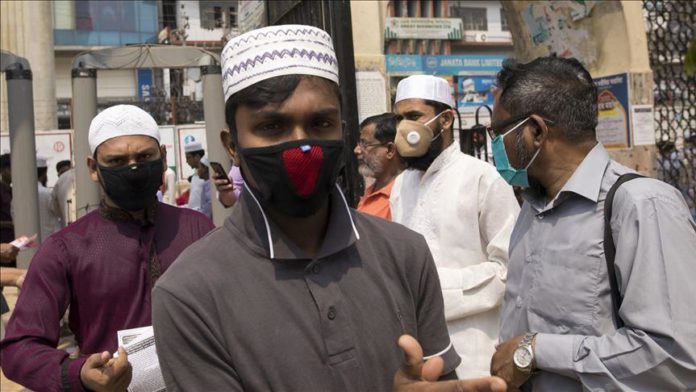 As experts and rights groups call for raising the COVID-19 sample testing to stem the virus’s spread, the Bangladesh government cut the number of testing despite continuous rise in fatalities.

The nation of 165 million population has conducted less than 1 million (918,272) samples with a 19.43% infection rate, since the first case of infection was detected in the country on March 8.

The Health Ministry on Friday conducted some 13,500 fresh tests.

Furthermore, the government has imposed charges for coronavirus sample testing which has been largely protested and criticized by experts and rights groups, including the main opposition Bangladesh Nationalist Party and Transparency International Bangladesh (TIB).

The TIB on Wednesday in a media statement came down heavily on the decision of charging fees in the public hospitals saying that the ministry has taken the decision while the infections were rising.

It also termed the government’s decision as “discriminatory, inhuman, mischievous, and suicidal” especially for the country’s poor community, and demanded immediate withdrawal of it.

The National Technical Advisory Committee on COVID-19 on Friday stressed the need to raise the capacity of testing instead of the number of testing labs.

In a media statement after holding a meeting over how to stop and deal with pandemic in the country, the committee asked to reduce the gap between collecting sample and giving test results of infections to have patients in isolation and providing treatment in time.

It also emphasized on procuring more advanced and affordable testing kits instead of similar testing kits.

Head of Bangladesh Doctors’ Foundation Dr. Shahed Rafi Pavel told Anadolu Agency that “less sample testing could convey a wrong message to the people ahead of the upcoming Eid al-Adha with a possibility of further peak of infection.”

Reduced number of testing could be conducted because of the limited testing kits in the stocks of the government, he observed, saying that the ministry should clarify the kits issue.

Rafi, criticizing the move of charging fees, said: “Bangladesh is still lagging behind among the Asian countries in terms of testing, and more testing is needed for breaking the infection chain.”

Authority, however, said in a notification recently that it has taken the move to avoid unnecessary testing.

The Health and Family Welfare Ministry said earlier this month that “most” people in the country, without any coronavirus symptoms. were taking advantage of the free testing service.

Meanwhile, Bangladesh registered some 37 deaths and 2,934 new infections in the past 24 hours.

The total death count now stands at 2,275 and infections at 178,443, said Nasima Sultana, a director at the Health Ministry at a regular online media bulletin on Friday.

August 7, 2020
BELGRADE, Serbia The arrival of illegal migrants in Hungary during the coronavirus pandemic is kind of a biological threat, that country’s prime minister said Friday. All...

Turkey not only partner, an ally: Top Spanish diplomat

July 27, 2020
We use cookies to ensure that we give you the best experience on our website. If you continue to use this site we will assume that you are happy with it.Ok