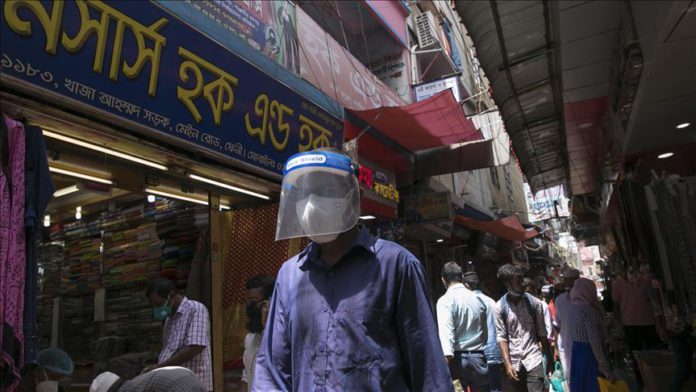 Bangladesh has recorded a total of 102,292 confirmed cases COVID-19 or coronavirus by Thursday, since the first case was reported on March 8.

As many as 3,803 fresh infections were reported over the past 24 hours across the country, a Director-General of Health Services Nasima Sultana said on Thursday.

Addressing a press conference in the Bangladeshi capital Dhaka, she said that 38 people have also died due to pandemic over the past 24 hours taking the total death count to 1,343.

Meanwhile, 1,975 patients have also recovered from the pandemic in the south Asian country with a population of 165 million taking the total tally of recoveries to 40,164, the official added.

During the past 24-hours, the country also tested 16,259 samples, Sultana said.

Another Director General of Health Services Abul Kalam Azad, who was himself infected by the pandemic and recovered said the government has appointed 2,000 physicians and 5,000 nurses to combat the disease.

Bangladesh Commerce Minister Tipu Munshi and lawmaker from opposition Gono Forum Mukabbir Khan, who tested positive recently, were present at the session of the national parliament on June 10 and 15.

So far 13 lawmakers in the country have tested positive for the virus.

The infection on Thursday also claimed the life of a doctor Rafiqul Haider, working at Enam Medical College Hospital near the capital Dhaka.

Speaking to Anadolu Agency, chairman of the Bangladesh Doctors’ Foundation Shahed Rafi Pavel said so far 40 doctors have died due to pandemic. As many as 1281 doctors had reported infection and out of them 764 recovered.

Meanwhile, the $3 rapid testing kit developed by Gonoshasthaya Kendra – the country’s foremost public health institution — has not been approved by the authorities at the Bangabandhu Sheikh Mujib Medical University.

The university said the kit failed to pass the authorized capacity to detect infection. Kendra had claimed that this low-cost kit was detecting coronavirus in less than 15 minutes.