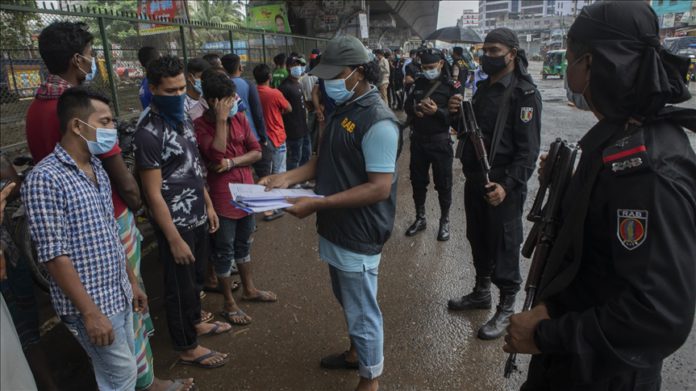 Bangladesh has banned entry for arrivals from eight countries, including its neighbor India, which have been listed in the country’s highest pandemic risk group, according to an official notification.

“No entry into Bangladesh (for residents as a point of origin) from this group of countries,” said the notification issued late Monday by the Civil Aviation Authority of Bangladesh (CAAB).

The countries belonging to this category, Group A, include India, Nepal, Botswana, Mongolia, Namibia, Panama, South Africa and Tunisia.

However, Bangladeshi nationals who are non-residents of these countries but have been there on a visit during the last 15 days will be allowed to return with special permission.

The notification added that Bangladeshi seafarers or ship engineers who have signed off from their vessels in those countries within the previous 15 days will also be allowed back home after submitting valid documents.

“(But) they have to complete a mandatory 14 days of institutional quarantine at government-nominated hotels.”

Meanwhile, the South Asian country of 166 million people has also extended an ongoing ban on domestic flights for seven more days until July 14 in the wake of an alarming surge in coronavirus cases.

Bangladesh on Monday recorded its highest-ever single day fatalities and cases since the pandemic began with 164 new deaths and 9,964 new infections, raising the total death toll to 15,229 and caseload to 954,881.

According to new findings of the government-run Institute of Epidemiology, Disease Control and Research (IEDCR), the COVID-19 Delta variant, which was first detected in India, is dominant in Bangladesh with 78% of patients reported to have the more infectious strain in June.

In the wake of an alarming deterioration of the pandemic situation, the country has been observing a stricter nationwide lockdown since July 1 that has been extended to July 14 to stem the spread of the virus despite the impact on the country’s economy and the plight of millions of low-income people.