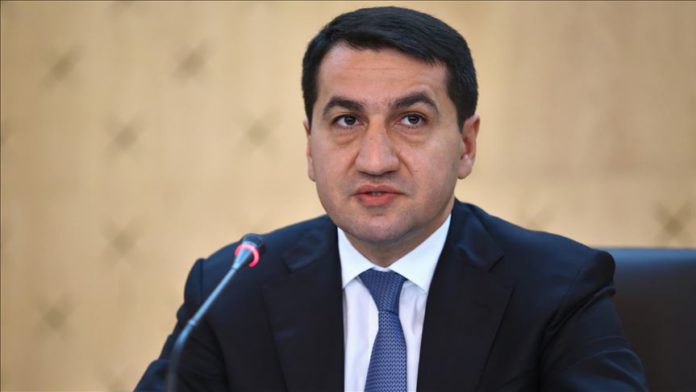 A top Azerbaijani official on Saturday urged the international community to condemn Armenia’s attacks on civilian settlements in Azerbaijan.

Hikmet Hajiyev, the assistant to the Azerbaijani president and head of the foreign policy department of the Presidential Administration, along with diplomatic corps and military attaches arrived in the city of Ganja, Azerbaijan’s second-largest city, which was struck overnight by the Armenian army with Elbrus operational-tactical missile complex, also known as SCUD.

Hajiyev said the “[Azerbaijani] nation’s just voice” should be heard by everyone, and thanked the heads of foreign missions and military attaches in Azerbaijan for their support.

“The people of Ganja are always strong and are always by the state,” he said.

He also held a video briefing for representatives of global media organizations accredited in Russia and Turkey.

Earlier Saturday, at least 13 civilians were killed, including four women and three minors, and nearly 50 others injured, when Armenian missiles struck Ganja.

Some 20 women and five minors were also among the injured, while two children are still missing,” the Prosecutor General’s Office of Azerbaijan said.

Along with the city of Ganja, a hydroelectric power plant in Mingachevir was also targeted by the Armenian army at around 1 a.m. local time Saturday (2100GMT Friday), but its missiles were neutralized by Azerbaijan’s air defense.