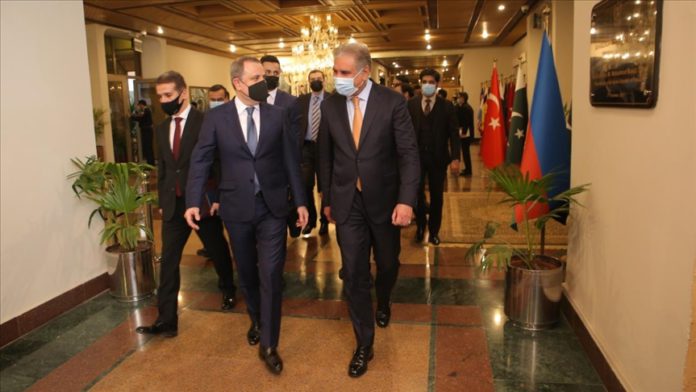 According to Pakistan Foreign Ministry, This is the first bilateral visit from Azerbaijan at the foreign minister-level in over a decade.

Later the two foreign ministers hold delegation-level talks and discussed the entire gamut of bilateral relations and exchange views on regional and international issues, Foreign Ministry said in a statement.

Both sides agreed to enhance cooperation in all filed including trade, agriculture, education, science, and technology.

Qureshi also congratulated Bayramov on his country’s victory to liberated their key territories from the Armenian occupation.

While Bayramov thanked Qureshi for Pakistan’s consistent support to his country over the Nagorno-Karabakh dispute.

Relations between the former Soviet republics have been tense since 1991, when the Armenian military occupied Nagorno-Karabakh, internationally recognized as Azerbaijani territory, and seven adjacent regions.

During the 44-day conflict, Azerbaijan liberated several cities and nearly 300 settlements and villages, while at least 2,802 of its soldiers were martyred. There are differing claims about the number of casualties on the Armenian side, which, sources and officials say, could be up to 5,000.

US plan aims to legitimize occupation of Palestine: Turkey