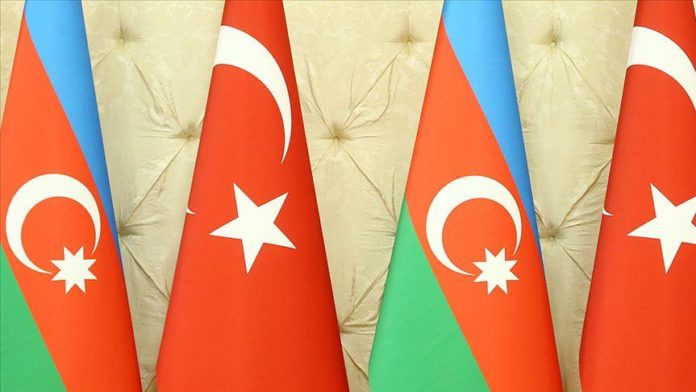 Azerbaijan’s nearly $20 billion investment in Turkey is a “sign of brotherhood and confidence in the Turkish economy,” the assistant to the Azerbaijani president said Tuesday in a special edition talks series hosted by the Islamic Cooperation Youth Forum (ICYF).

Speaking about the new geopolitics in the South Caucasus and perspectives of regional cooperation, Hikmet Hajiyev said Turkish-Azerbaijani cooperation along with economic and trade relations are also a “joint investment.”

​​​​​​​”First, it is a sign of the brotherhood between Turkey and Azerbaijan, and in the meantime, it’s a sign of confidence in the Turkish economy, because Turkey has one of the vibrant economies in the region and the recent developments of Turkey economy-wise and trade-wise also make Azerbaijan happy,” he said.

The two countries, with joint efforts, “have changed the energy landscape of the wider European continent,” Hajiyev said.

He recalled that top Azerbaijani officials had recently attended an intergovernmental joint commission meeting in Turkey.

“The intergovernmental joint commission is a very instrumentalized mechanism of development of comprehensive, economic and trade cooperation and the relations between Turkey and Azerbaijan,” Hajiyev said.

He added that it is not only limited to those areas, but is a comprehensive program which also covers education, culture and other perspectives.

With joint efforts, Azerbaijan and Turkey have changed the geopolitical and energy map of the South Caucasus region and also “brought together” the Caspian Sea, Black Sea, the Mediterranean Sea and the Adriatic Sea, said Hajiyev.

He said the joint efforts which started with the Baku-Tbilisi-Ceyhan oil pipeline have now ended up with a recent commissioning of the Trans-Anatolian Natural Gas Pipeline (TANAP) and the Trans Adriatic Pipeline (TAP) projects.

He stressed that the “last segment” of the Southern Gas Corridor is now fully operational and brings the gas of Azerbaijan from the shores of the Caspian Sea to the European market, adding Turkey is a “major transit country.”

The Southern Gas Corridor includes the Shah Deniz 2 field, the South Caucasus Pipeline, TANAP and TAP. Azerbaijan, Georgia, Turkey, Bulgaria, Greece, Albania and Italy are the countries that are involved in the 3,500-kilometer-long project.

The Baku-Tbilisi-Kars railway system was yet “another fundamental contribution” to the development of the region’s connectivity, which now “brings together” the Central Asian countries.

“We have seen recently the Turkish cargos with the same route have been delivered to China,” he said, adding that in a sense, it is also a “renewal of the ancient Silk Road,” where Turkey and Azerbaijan played a “fundamental and crucial role.”

He emphasized that “innovative development” based on innovation and science is also in the forefront in Turkey.

Meanwhile, education and culture is another important field of cooperation between Baku and Ankara, he stressed, adding that many Azerbaijani students are studying in Turkey and after returning are contributing to the development of their country with their knowledge and skills, while there are also many Turkish students receiving an education in Azerbaijan.

He recalled that 2021 was declared the Year of Nizami Ganjavi in Azerbaijan and Yunus Emre Year in Turkey, adding that Azerbaijan is looking forward to enriching the common cultural cooperation.

There was also a “transformational change” in 2020 in the geopolitics of the region of the South Caucasus, particularly in the context of the Armenia-Azerbaijan conflict, Hajiyev said, referring to the liberation of Nagorno-Karabakh and other settlements from an Armenian occupation that lasted for nearly three decades.

“As everybody knows, Azerbaijani people have been suffering from the military occupation of Armenia for more than 30 years.”

He also hailed the support of Turkey towards Azerbaijan during the 44-day Karabakh war that began on Sept. 27 last year.

Hajiyev said “the brotherly” Turkey always supported justice, international law and the “just cause” of the Azerbaijani people.

He also saluted the “political and moral support” of Turkey towards Azerbaijan during the recent conflict, adding that Turkish President Recep Tayyip Erdogan — “who is a great friend of Azerbaijan and Azerbaijani people” – once again declared that Turkey renders its support to Azerbaijan.

“​​​​​​​Such moral and diplomatic support of the brotherly Turkey enhanced the courage and determination of Azerbaijan to liberate Azerbaijan’s occupied territories from Armenia’s occupation.”

“The 44 days of war resulted in the victory of Azerbaijan, while Armenia signed a declaration of capitulation, and Azerbaijan ensured the withdrawal of Armenian troops from its occupied territories. But now, there are more opportunities for the peaceful development and transformation of the region. Azerbaijan, from its side, is ready for that, as it has been declared by the President [Ilham Aliyev],” he said.

Based on the trilateral statement that has been signed between Russia, Azerbaijan and Armenia, Baku is engaged in consolidating on the practical elements of this statement, Hajiyev added.

Referring to the Jan.11 statement between Russia, Azerbaijan and Armenia about opening the transportation routes, Hajiyev said: “We do believe that opening of communications and also trading relations among the reginal countries will further boost the potential of the peaceful development.”

“For that purpose, there was also an initiative of a 3+3 format of cooperation among the countries of the Caucasus and also neighboring countries like brotherly Turkey, Russia and Iran, which could also join this process and have full-fledged regional cooperation.”

He added that Baku believes that Yerevan can also “gain a lot of benefits” from such cooperation.

“Under such circumstances, we can have full transformation of the region of the Caucasus, and every country, including Armenia, can get benefit from that,” he said.

“Being a self-isolated country and also having a high level of unemployment, demographic challenges and some other difficulties, Armenia can get a benefit from such international cooperation, but for that Armenia finally must end its policy of occupation and also should curb its policy of revanchism,” he said, adding that unfortunately, some political groups in Armenia are raising up “revanchist” ideas.

He said in case of “revanchism ideas” by Armenia, Azerbaijan has the “power” to respond, adding that they “will never ever allow again the repetition of such crimes against the Azerbaijani people.”

Hajiyev reiterated that the possibility of Azerbaijani and Turkish nationals visiting both countries with their ID cards is among the main agenda items between the two states.

“I’m looking forward at the earliest convenience for such an opportunity to visit brotherly and beautiful Turkey with my own identity card,” he said.

“We do believe that it’s going to boost further the people-to-people contacts, business contacts, human and cultural cooperation between our brotherly countries, and in a wider sense contribute to the development of our countries.”

On Dec. 11, 2020, the Turkish Foreign Ministry announced that Turkey and Azerbaijan had signed a protocol allowing mutual passport-free travel for nationals on both sides.

The agreement was signed on Dec. 10 during a visit by Turkish President Recep Tayyip Erdogan to Azerbaijan, with a Turkish Foreign Ministry statement the following day saying that the protocol allowing travel with ID cards would pave the way for the people of Azerbaijan and Turkey to “intertwine further.”

After Azerbaijan revoked visa requirements for Turkish citizens, the residence period for the country’s nationals was extended from 30 days to 90 days, noted the communique.