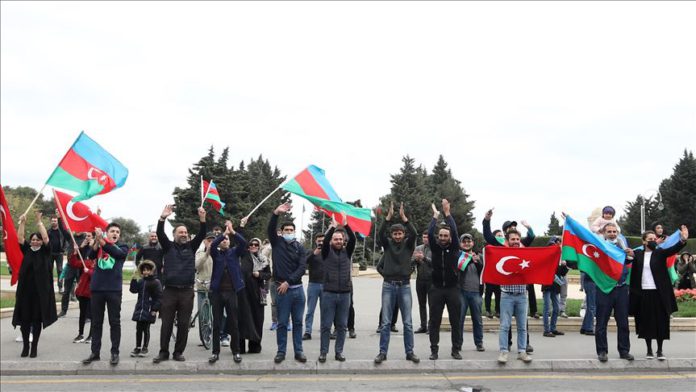 The liberation of the strategically important city of Shushu gave way to street celebrations as the Azerbaijani president made the announcement on national television.

Thousands of Azerbaijanis went out to celebrate the defeat of Armenian forces in the key town that was occupied on May 8, 1992.

In the capital Baku, people hoisted Turkish and Azerbaijani flags. While some danced on the streets, others drove back and forth in vehicles to mark the victory.

Many were unable to hold back their tears of joy.

Shusha is located on the road to Khankendi, the region’s largest city. It is a part of the Nagorno-Karabakh, or Upper Karabakh region, which is an internationally recognized territory of Azerbaijan.

The city is also known as one of the symbols of Azerbaijani history and culture. Many prominent Azerbaijani musicians, composers, and scholars were born here.

Relations between the two former Soviet republics over Karabakh remain tense since 1991 but fresh clashes broke out on Sept. 27.

February 21, 2020
We use cookies to ensure that we give you the best experience on our website. If you continue to use this site we will assume that you are happy with it.Ok