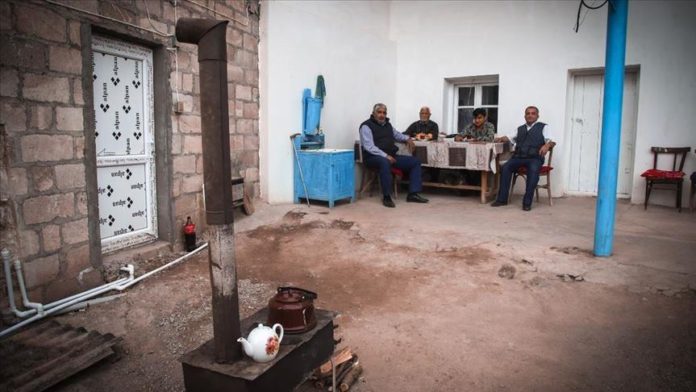 Azerbaijani villagers living near the country’s western frontier have refused to leave their homes, braving Armenian border attacks and fire.

The Armenian military, which continues to attack and harass Azerbaijan, targets not only soldiers but civilians as well.

Alibeyli village in the northwestern border province of Tovuz is one of the major civilian settlements under constant fire from Armenian forces.

The village lies very close to the contact line, with military emplacements nearby.

Some of the 870 houses in the village are nearly 100 meters (328 feet) from the Armenian positions at a visible distance.

Despite the constant attacks, the people of Alibeyli have held their ground, continuing with their daily lives and ignoring the sounds of gunfire.

The village’s 4,300 inhabitants are determined to protect their homeland without fear of Armenian attacks.

Resident Pasha Hasanov, 87, told Anadolu Agency that the villagers heroically resisted the Armenian attacks in the 1990s and did not evacuate their homes, still showing the same resistance today.

“If the war starts again one day, we won’t leave our village, whether we’re martyred or survive,” said Hasanov, who had lost one of his sons in the Upper Karabakh conflict with Armenia.

The 32-year-old Rahip Hasanov, whose house stands right next to the military positions, said he would never leave his homeland despite the hardship and dangers.

Recounting that his brother had been martyred in 1993, Hasanov stressed that he was ready as well to be a martyr if necessary.

Meanwhile, Huseyin Hasanov, 52, said Armenians violated the cease-fire between the two countries almost every day and targeted the homes of civilians.

With his trust in the Azerbaijani Armed Forces, Hasanov said he was a veteran of the conflict in the 1990s, in which he was injured.

He expressed confidence that the Azerbaijani army would both protect the homeland and rescue lands in the occupied Upper-Karabakh area.

Valeh Rzayev, 68, and one of Alibeyli’s residents, said he was born in the village and would die there as well.

He said the Armenian forces opened fire on the village day and night, adding that this has been going on for nearly 30 years.

Rzayev said they trusted the Azerbaijani army, and that this is why they lived fearlessly in their lands.

Azerbaijan was not alone in its just cause, Rzayev said: “We thank our brother Turkey, the Turkish nation, and particularly President Recep Tayyip Erdogan, for standing with us in hard times.”

In recent months, Armenia has conducted numerous attacks on the Tovuz area, which lies on an energy route close to the Azerbaijan-Georgia-Turkey corridor.

However, the attack martyred 12 Azerbaijani soldiers, including high-ranking officers, and wounded four troops.

On Sept. 21, clashes in the same region flared up again, when a soldier of the Azerbaijani army was martyred and another injured.

The OSCE Minsk Group — co-chaired by France, Russia and the US — was formed to find a peaceful solution to the Upper Karabakh conflict, but has yet to get any results.

Report shows Muslims, Islam continue to be target of intolerance in...