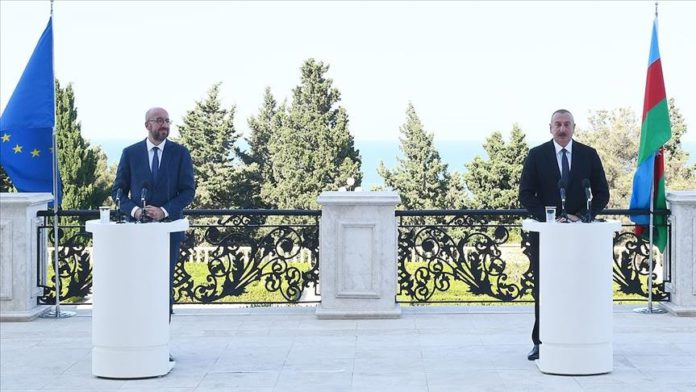 Azerbaijan’s president and the president of the European Council discussed EU-Azerbaijani relations and regional issues at a working dinner Sunday.

The talks took place during a visit by Charles Michel to Azerbaijan’s capital Baku to meet with Ilham Aliyev.

Speaking at a joint press conference after their meeting, Aliyev said the EU is a close partner and Azerbaijan has worked with the bloc in various areas for many years with a broad agenda.

Pointing out that one of the important issues on their agenda is energy security, Aliyev said they exported more than 3 billion cubic meters of natural gas to EU countries, especially Italy, Greece and Bulgaria, and that the volume of natural gas to be exported to the European market will increase.

“Now it’s time to think about peace and to turn the page. We’re ready for that. And today, with Mr. President, we broadly discussed our plans, our initiatives and our approaches to the newly emerged situation,” said Aliyev.

“And I think that demonstrating goodwill and a very pragmatic approach in a relatively short period of time, we can resolve most of the still remaining issues on the table,” he said, adding the EU will play a very important role for a broad regional cooperation.

Michel for his part said he had in-depth discussions with Armenian authorities and Prime Minister Nikol Pashinyan during his recent visit to the capital Yerevan on the importance of a possible peace agreement.

“We are ready to play a positive role, to play a constructive role as a possible honest broker. Of course, we respect the role that is played by the Minsk group.

“But this doesn’t mean that it is not possible for the European Union also to provide some expertise, some support, some ideas and to encourage some possible improvements in order to provide more stability, more security, and to be certain that it would be possible to have a sustainable peace in the region,” he added.

Relations between the former Soviet republics of Armenia and Azerbaijan have been tense since 1991, when the Armenian military occupied Nagorno-Karabakh, also known as Upper Karabakh, a territory internationally recognized as part of Azerbaijan, and seven adjacent regions

During a subsequent 44-day conflict which ended under a deal signed on Nov. 10, Azerbaijan liberated several cities and nearly 300 settlements and villages from Armenia’s nearly three-decade occupation.