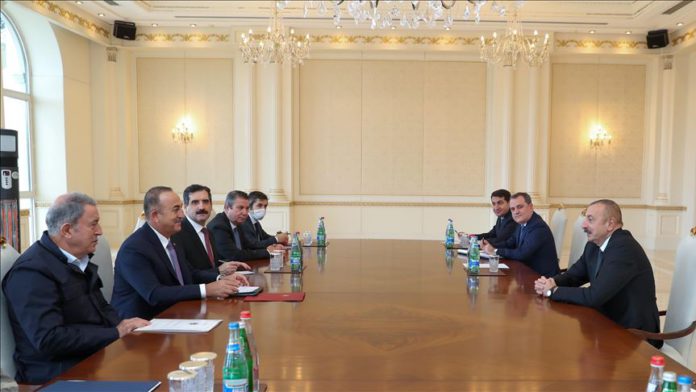 The top officials arrived in the capital Baku for meetings with Aliyev and other Azerbaijani officials.

Expressing his pleasure to be in Azerbaijan on Sunday, a historic day, Cavusoglu told Aliyev: “We are always very happy to be in Baku, but we are especially happy today. Because the heroic Azerbaijani army liberated the ancient city of Shusha from the occupying [forces of] Armenia, under your commanding leadership.”

Cavusoglu also conveyed greetings from President Recep Tayyip Erdogan and further congratulated Azerbaijan and its people on the long-awaited victory.

Akar also expressed joy at the liberation of Shusha, saying: “We support our Azerbaijani brothers and sisters in their 30-year struggle to regain their territories from occupation.”

Citing the saying that Turkey and Azerbaijan are “one nation under two states,” Akar stressed that Turkey will continue its steadfast support for its sister state Azerbaijan.

Azerbaijan’s president on Sunday announced the liberation of the key city of Shusha from Armenian occupation.

Shusha – which was occupied by Armenian forces on May 8, 1992 – has critical importance in liberating Nagorno-Karabakh, or Upper Karabakh, an internationally recognized territory of Azerbaijan. It is located on the road to Khankendi, the region’s largest city.

Shusha is known as a symbol of Azerbaijani history and culture, and was home to many prominent Azerbaijani musicians, composers, and scholars.

With relations between the two former Soviet republics over Karabakh tense since 1991, fresh clashes broke out on Sept. 27.

In the weeks since, Armenia has repeatedly attacked Azerbaijani civilians and forces, even violating three humanitarian cease-fire agreements.

At least 92 Azerbaijani civilians have lost their lives, including 11 children and infants, according to authorities.

As many as 404 people, including at least 36 children, have also been injured.

Over 3,000 houses and 100 multi-apartment residential buildings have been destroyed, while more than 500 civilian facilities have been damaged.

Since operations began on Sept. 27, the Azerbaijani army has liberated from Armenian forces’ occupation four city centers, three settlements, and over 220 villages, as well as some strategic heights.