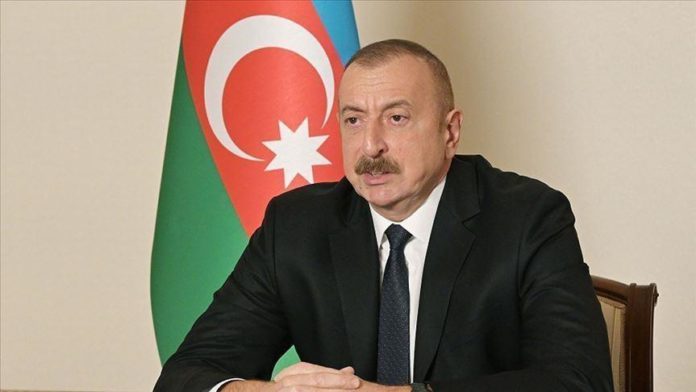 Azerbaijani leader on Thursday slammed the Armenian Foreign Minister Ara Ayvazyan for his recent visit to the Nagorno-Karabakh.

“These visits should be stopped. We warn that if such provocative steps are taken, Armenia will regret even more,” President Ilham Aliyev said in an online meeting on the results of 2020.

Earlier on Tuesday, Ayvazyan had visited Nagorno-Karabakh and met with so-called administrators there.

Aliyev underlined that Baku previously conveyed its concern to the Russian elements working in the region on the issue that no foreign citizen could visit the Nagorno-Karabakh area without the permission of Azerbaijan.

“Unfortunately, with the permission of the Russian elements, the French parliamentarians went there. As a result, the French ambassador in Baku was summoned to the Foreign Ministry and a [diplomatic] note was given to him. We will not remain silent,” he added.

Criticizing Ayvazyan’s visit to the territory internationally recognized as part of Azerbaijan, Aliyev said: “What are you doing there? Don’t forget about the war. Don’t forget that the [Azerbaijani] ‘iron fist’ is [still] in place.”

“Armenian foreign minister, who are you to go there? We warn you. If a similar step is repeated, our response will be very harsh. For the first time, we warned them through the Foreign Ministry. After that, the warning will be given differently,” he said.

Emphasizing that steps are now being taken to normalize relations between Baku and Yerevan with Moscow’s mediation, Aliyev said the “provocative” steps taken by Armenia will worsen the situation.

“Well, if relations are normalized, then what is the need for such provocative “visits”? What do they want to show? Do they want to provoke us again? Let’s not forget that such steps cost them dearly,” he noted.

Aliyev stressed that all visits must be stopped to the area, adding that no foreign citizen can enter that area without Azerbaijan’s permission.

“No international organization, except the Red Cross, can go there. This is our territory. The whole world recognizes this area as an integral part of Azerbaijan.”

In a statement released on Tuesday, the Azerbaijani Foreign Ministry said that Ayvazyan’s visit and signing of some “documents” in Nagorno-Karabakh contradicted the tripartite declaration signed between Russia, Azerbaijan, and Armenia on Nov. 10 last year.

“We would like to remind that the Armenian Prime Minister signed the statement on November 10th […] Violation of these commitments by official Yerevan is a provocation,” the statement said.

The statement said that such moves are taken for a domestic audience and do not serve normalization of the situation in the region.

“Armenian officials should not act based on unfounded illusions,” it said, adding they should accept the new reality that emerged in the region.

The truce is seen as a victory for Azerbaijan and a defeat for Armenia, whose armed forces have withdrawn in line with the agreement.​​​​​​​