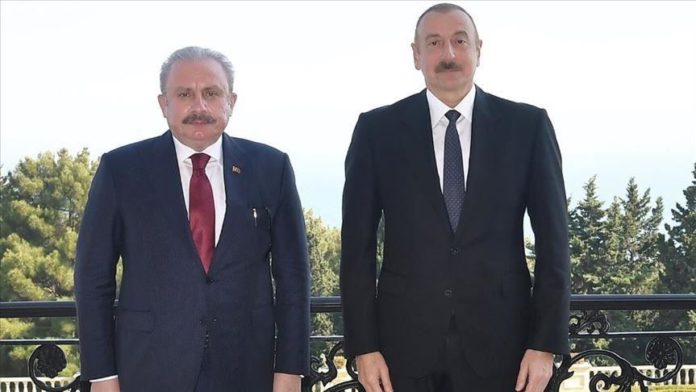 Welcoming the delegation, Aliyev said that visit of the Turkish delegation to Azerbaijan has a “special significance in this difficult time.”

“This is further evidence of Turkey’s brotherly attitude towards Azerbaijan, a manifestation of solidarity. We have felt the support of Turkey since the start of these events and we feel it today,” he said, referring to Armenian attacks.

He also underlined that Turkish President Recep Tayyip Erdogan’s statement in support of Azerbaijan shows the Turkish-Azerbaijani unity is “unshakable”, and that the two states “stand by each other in difficult times.”

“I have said this several times and I want to say again that if this open position had not been demonstrated, other forces could have intervened. Armenia’s goal is exactly that, they want to expand the geography of this conflict but they are completely wrong. They see that they cannot confront us on their own,” Aliyev said.

Noting that the support of the Turkish state and nation is of special importance, the Azerbaijani leader said the two countries are “the closest countries in the world.”

“It is impossible to find other countries elsewhere in the world that would be so close to each other as Turkey and Azerbaijan. We are always next to each other. It will continue to be the case,” he added.

Aliyev also thanked Sentop and the Turkish authorities for their stance and for visiting Azerbaijan.

Sentop, for his part, thanked Aliyev and conveyed the greetings of the Turkish leader, and members of the Turkey’s Parliament, adding that the prayers of the parliament are with “brotherly” Azerbaijan.

He emphasized that the delegation includes authorities from different political parties in Turkey, adding that they came with a “highly representative delegation” to express their support.

Recalling that Turkey’s four political parties made a statement in the parliament following Armenian forces’ attacks on Azerbaijani residential areas, Sentop said: “But we wanted to repeat and say all this in Baku. The support and prayers of our nation are always with Azerbaijan, with you. We pray for the success of Azerbaijan, and as a whole nation we rejoice when we receive good news. May Allah bless you and grant you victory.”

Sentop highlighted that Turkey’s support for Azerbaijan was based on “friendship and brotherhood.”

“Our support for Azerbaijan is not only about friendship. This struggle is Azerbaijan’s just struggle. It is also historically right because Nagorno-Karabakh has always been the land of Azerbaijan throughout history, a part of the Azerbaijani homeland for hundreds of years,” he said, adding that Azerbaijan is also right in terms of international law.

Sentop, who is in Azerbaijan on a three-day official visit to hold talks on the ongoing Upper Karabakh conflict, also met with his Azerbaijani counterpart Sahibe Gafarova and Prime Minister Ali Asadov.

During the meetings, Sentop recalled that following Armenia’s attacks, Turkey showed at all levels and at every platform that it stood by Azerbaijan.

On Saturday, at least 13 civilians were killed, including two children, and 48 others injured, when the Armenian army attacked Ganja, Azerbaijan’s second-largest city, with missiles.

It was Armenia’s second deadly attack in less than a week on Ganja, an area far from the front line with a population of 500,000 people.

Meeting on Oct. 10 in Moscow, Baku and Yerevan officials agreed to a cease-fire to allow an exchange of prisoners and the recovery of bodies in Nagorno-Karabakh.

But, within 24 hours of the announcement of the cease-fire, the Armenian army carried out a missile attack on Ganja, killing 10 people, injuring 35 others.

In total, about 20% of Azerbaijan’s territory – including Nagorno-Karabakh and seven adjacent regions – has remained under illegal Armenian occupation for nearly three decades.