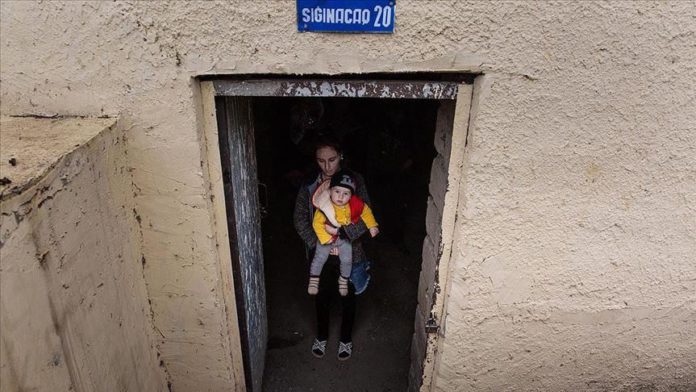 Civilians in Azerbaijan’s western-central city of Terter have been living in shelters for 10 days to protect themselves from Armenia’s violent attacks.

Some residents of Terter have been struggling for their lives in shelters since Sept. 27 when the attacks started.

Others have immigrated to safer residential areas far from the conflict zones.

“I am living in a shelter with my four kids and neighbors. Many missiles landed around my house,” said Cavid Hekimov, one of the residents taking shelter since the first day of the attacks.

He said they will remain in the shelter for their safety and as precaution.

Residents in the shelters were assured that the Azerbaijani government provides them with all their basic needs as long as they remain in shelters.

Terter is one of the civilian settlements that Armenia targets with heavy artillery firings.

Border clashes broke out on Sept. 27, when Armenian forces targeted Azerbaijani civilian settlements and military positions, leading to casualties. Azerbaijan’s parliament declared a state of war in some of its cities and regions following Armenia’s border violations and attacks in the occupied Upper Karabakh, also known as Nagorno-Karabakh, region.

Relations between the two former Soviet nations have been tense since 1991 when the Armenian military occupied Upper Karabakh, an internationally recognized Azerbaijani territory.

Among others, France, Russia, and NATO have urged an immediate halt to clashes in the occupied region.

At least 27 civilians were killed and 141 wounded in Azerbaijan by Armenian attacks so far, Azerbaijani officials say.