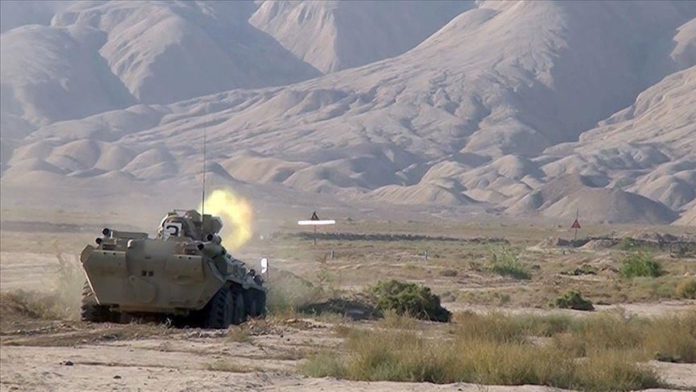 Azerbaijan has liberated the city of Fuzuli and seven surrounding villages from Armenian occupation, the country’s leader said early Saturday.

Separately, in an address to the nation, Aliyev said: “The city of Fuzuli was liberated from the occupiers. Fuzuli is ours! Karabakh is Azerbaijan! I cordially congratulate all the people of Azerbaijan on this occasion.”

He also stressed that the Armenian leadership is committing “war crimes” against Azerbaijan.

Referring to the Armenian army “cowardly shelling” the cities of Ganja and Mingachevir, Aliyev said the “the fascist leadership of Armenia” has killed and wounded many civilians.

Earlier Saturday, at least 13 civilians were killed, including two children, and more than 40 others injured, when Armenian missiles struck Ganja, Azerbaijan’s second-largest city.

Aliyev wished Allah’s mercy to all martyrs and healing to the wounded.

Along with the city of Ganja, a hydroelectric power plant in Mingachevir was also targeted by the Armenian army at around 1 a.m. local time Saturday (2100GMT Friday), but its missiles were neutralized by Azerbaijani air defense.

“This once again shows the fascist nature of the Armenian leadership. This is not the first time our cities have come under fire. Armenia fires on Tartar, Aghdam, Goranboy, Aghjabadi and other cities practically every day,” said Aliyev.

Armenia’s “cowardly actions” cannot break the will of the Azerbaijani people, he underlined.

“Shooting at civilians, including firing missiles, is a war crime, and they must and will bear responsibility for this crime. We are giving our answer on the battlefield. We are avenging and will continue to avenge the deaths of innocent civilians on the battlefield,” he said.

The president said his country had never targeted civilians.

Hikmet Hajiyev, an aide to Aliyev, wrote on Twitter that Armenia’s strongest fortified defense line had been shattered.

“The liberation of Fuzuli will go down in the military history books,” he said.

Fuzuli and most of its villages – home to some 144,000 Azerbaijanis –were occupied by the Armenian army in 1993.

Only 20 villages in the Fuzuli province — which consists of the city center, one town, and 75 villages — were not occupied.

On last night’s attack, Hajiyev said the “indiscriminate killing of civilians by Armenia’s [Prime Minister] Nickol Pashinyan” in Ganja was the same tactic and missile system used by the late “Saddam Hussein against [Iraqi] civilians.”