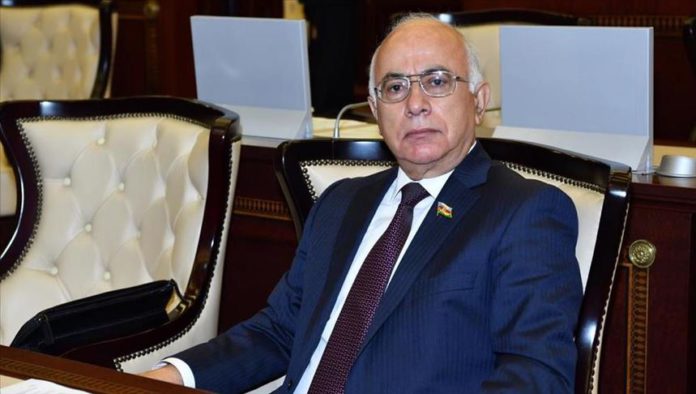 If the Caucasian Islamic Army had not come to the aid of the Azerbaijani people in 1918, their republic would not have been able to survive for a precarious two years until 1920, when it fell into Soviet hands, according to an Azerbaijani historian.

Anar Isgandarov, who is also a lawmaker at the Azerbaijani Parliament, told Anadolu Agency in an exclusive interview that the establishment of the Azerbaijani Democratic Republic, also known as the Azerbaijan People’s Republic, on May 28, 1918, was one of the most glorious chapters in the country’s history and is celebrated each year in Azerbaijan as Republic Day.

The Caucasian Islamic Army, comprised of Turkish and Azerbaijani soldiers, protected the country’s territorial integrity and liberated Baku — Azerbaijan’s present-day capital — 102 years ago, setting the stage for the country’s independence in 1991.

On Sept. 15, 1918, an elite Ottoman force, dubbed the Caucasian Islamic Army, under the leadership of Nuri Pasha (Killigil), was sent to what is today Azerbaijan and Dagestan further north in Russia in the final months of the World War I, following a plea from the region’s people. Together with local Azerbaijani people, many of them sacrificed their lives for the cause of helping a brotherly nation.

“They were martyred for us, for their Muslim brothers,” he said.

The liberation of Baku at the time paved the way for the transfer of the capital from the northwestern town of Ganja and ensured the territorial integrity of Azerbaijan, setting the basis for its contemporary boundaries.

Even today, after so many years since Azerbaijan restored its independence, its people visit the memorials of Turkish martyr’s and pray for their souls, Isgandarov said.

“In December 1918, the first decision of [newly established] Azerbaijani Parliament was to place a monument for the martyred Ottoman soldiers and officers in the highest location in Baku city. Though its plan and sketches were prepared, the [Soviet] occupation in April 1920 didn’t allow [its construction]. Finally, in 1999-2000 the monument has been erected.”

Mammad Amin Rasulzade, a statesman, prominent public figure, and founder of the Azerbaijani Democratic Republic, was the only member of the country’s establishment who “kept this struggle until his last breath.”

Many of the country’s other top figures were later persecuted and killed, while others immigrated or exited political life, Isgandarov said.

“He devoted whatever he had, including his family, his son, his wealth, to the independence of the Republic.”

Emerging from the internal upheaval brought on by the fall of the Romanov Tzars in Russia, a Transcaucasian parliament, known as the Seym or Supreme Power of the Transcaucasia, was formed in Tbilisi, the capital current of Georgia, on Feb. 14, 1918, by representatives from the Southern Caucasus.

The Muslim faction of the Seym comprised of 44 delegates who were elected from the region to the Russian Constituent Assembly formed after the 1917 Revolution and represented over a million Turkic Muslims in Azerbaijan and the Southern Caucasus.

The Muslim faction, or Council of Muslims, was functioning as a Muslim Parliament of Transcaucasia.

Following the persistent claims of the Azerbaijani representatives, who were among the most consistent attendees in the parliament, the Seym proclaimed the independence of Transcaucasia on April 9, 1918.

As a result, Isgandarov said, the Georgian delegation left the Seym and proclaimed the independence of Georgia on May 26, 1918,

Following Georgia, members of the Muslim faction held a separate meeting one day later and decided to proclaim the independence of Azerbaijan.

With this purpose, the Transcaucasian Muslim Council proclaimed itself the National Council of Azerbaijan — the country’s lawmaking body.

During that meeting, Rasulzade was elected Chairman of the National Council of Azerbaijan, though he was not present at the meeting and was in Batumi, Georgia, Isgandarov added.

On May 28, 1918, a historic meeting in Tbilisi adopted the Declaration of Independence of Azerbaijan, consisting of six articles, thus, making Azerbaijan the first Parliamentary Republic in the Muslim East, he said, adding: “The occasion turned the geographical reference of Azerbaijan into the political concept.”

“After the other government’s [Georgia] proclamation of independence, the government lead by Fatali Khan Khoyski came to Ganja city [Azerbaijan] in June, and was not able to come directly to Baku because the city was then controlled by Armenian militants.”

Isgandarov underlined that the Caucasian Islamic Army came to help the Azerbaijani people in Ganja upon their plea from the Ottoman Empire, and completed its mission in September in Baku after liberating the city.

During the independence years, the parliament adopted laws and decrees to build a national army and recognize Azerbaijani as the official language, as well as others on national emblems, citizenship and national currency.

The laws and decrees adopted primarily aimed to uphold the country’s independence, territorial integrity and rights and liberties and create a democratic state based on law.

“In July 1919, the Azerbaijani parliament passed a law on gender equality in elections, whereas many European countries adopted that law only after World War II.”

In January 1920, Azerbaijan was de facto recognized by the international community at the Paris Peace Conference following World War I.

The Azerbaijani Democratic Republic was toppled after almost two years by the Soviet Union, and the country was restored its independence only after the collapse of the USSR in 1991.

May 28, the anniversary of the founding of the Azerbaijani Republic, is a “sacred day” in the history of the country’s people, said Isgandarov.

“I’d like to sincerely congratulate the entire Muslim Turkic world, including every person in the Republic of Turkey, because this holiday is their holiday as much as it is ours.”

“Same as Oct. 29 [Republic Day of Turkey] is an esteemed day for Anatolian Turks, same as the Fourth of July [US Independence Day] is illustrious for Americans, same as the Bastille Day [July 14] is honorable for French, May 28 is the same for the Azerbaijani people,” he added.

Isgandarov underlined that the “souls of all the martyrs” would find peace when Azerbaijan ensures its territorial integrity.

“I’m sure that with the help of the brotherly Turkish Republic, Azerbaijan will ensure its territorial integrity,” he said, referring to Azerbaijani lands occupied by Armenian forces.

Upper Karabakh, or Nagorno-Karabakh, is an internationally recognized territory of Azerbaijan that has been illegally occupied since 1991 by Armenian military aggression.