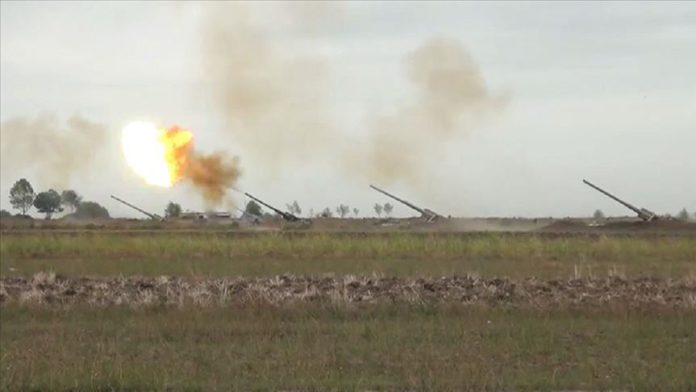 Azerbaijan demands not only an immediate and total withdrawal of Armenian troops from all Azerbaijani territories but also urges Armenia to give a timetable for it, Azerbaijani Ambassador to Ethiopia said.

Ambassador Elman T. Abdullayev reiterated his government’s call during an interview with Anadolu Agency at his office in the Ethiopian capital Addis Ababa.

“Not only do we demand the total withdrawal from all Azerbaijani territories, but we also demand that they give us a timetable as to when and how they do that,” he said.

He said the international community made a mistake to describe the situation between the two countries as a “frozen conflict”, while in fact, it was a very dangerous and active one threatening stability in the region.

“Impunity breeds crimes; impunity encourages other crimes,” he said adding “we have to respect the territorial integrity of states.

“Sovereignty and territorial integrity is the most sacred international principle,” he noted, but accused the international community of “turning a blind eye.”

“They launched ethnic cleansing (in the Azerbaijani territories they have been in occupation for three decades),” the ambassador lamented and they do those crimes with “fake excuses such as self-determination.”

On Sunday, the Azerbaijani Foreign Ministry issued a statement on what it described as Armenia’s violation of the humanitarian cease-fire.

“Despite the agreement reached during the meeting of the Foreign Ministers of Azerbaijan and Armenia in Moscow with the mediation of Russia to observe a humanitarian cease-fire from noon on Oct. 10, 2020, the Armenian armed forces continue to grossly violate the agreement,” the statement read.

On the night of October 11, the statement said, the second-largest city in Azerbaijan, Ganja, which sits far beyond the frontline, came under rocket fire by the Armenian armed forces. The attack killed nine civilians and injured 34 others, including minors.