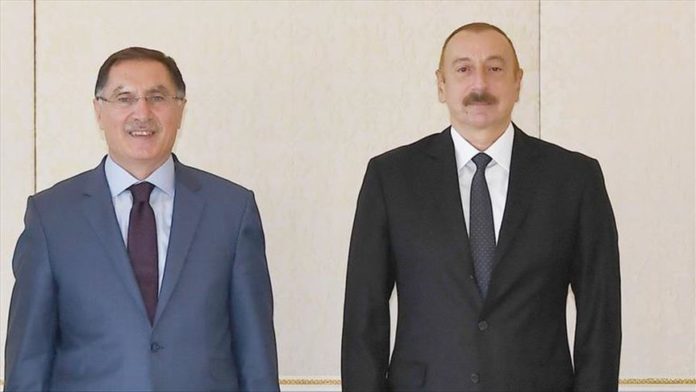 According to the statement by Azerbaijan’s Presidency, Aliyev said they are fighting against a “savage enemy” while mentioning the attacks carried out by the Armenian forces on Azerbaijani civilian settlements.

He added that Armenia poses a huge threat to the whole world.

“They want to destroy our cities; they want to break the will of the Azerbaijani people. But they fail and become even more depraved. We take our revenge on the battlefield,” Aliyev was quoted as saying.

“They have insulted our mosques. They have destroyed all our historical sites. There are only stones of houses left.”

The president talked with pride on the support they receive from Turkey, and said that the rightful cause of Azerbaijan has been announced to the world through Turkish media.

“We continue our just cause. We have a brotherly country such as Turkey by our side. We are always together,” he added.

Reminding that some countries make Armenian-sided publications, Aliyev said: “This is great injustice. This is fraud. This is the distortion of events. Attempts to portray Azerbaijan as an aggressor or occupier have no basis, of course. Therefore, the presence of the Turkish media here from the first days and their reports from the war zone serve to provide accurate information on this issue to the world.”

The Turkish official, for his part, reminded that the Armenia’s occupation for 30 years put millions of Azerbaijani citizens into a situation where they have become refugees, and that the occupation has caused serious human rights violations.

Malkoc mentioned that Armenian forces do not retreat from the Azerbaijani territories despite the UN resolutions, instead, they volume their attacks.

He added that they came here to examine ongoing human right violations at site, and report all of them to the world, including all of the most important and related international actors.

World powers, including Russia, France, and the US, have called for a new sustainable cease-fire. Turkey, meanwhile, has supported Baku’s right to self-defense and demanded the withdrawal of Armenia’s occupying forces.