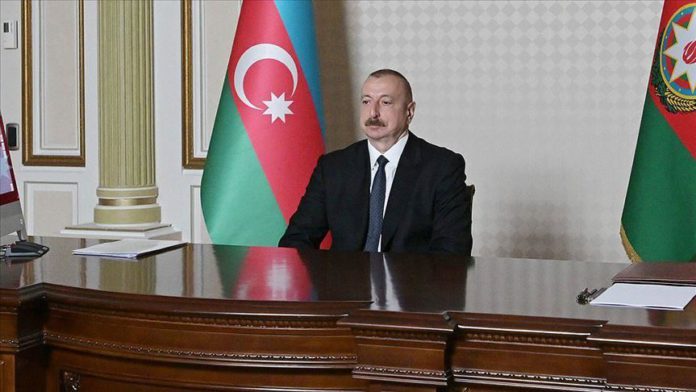 Azerbaijan’s president on Monday reported his country’s call for Turkey to be included in the process to resolve Baku’s ongoing conflict with Armenia.

In an interview with Haber Global TV, Ilham Aliyev commented on recent developments in the Upper Karabakh region, a recent humanitarian cease-fire between Azerbaijan and Armenia and Turkey’s possible inclusion in the solution process between the two countries.

Aliyev argued that some members of the Minsk Group under the Organization for Security and Co-operation in Europe (OSCE) were geographically too far away from the region and that the influence of the Armenian diaspora in the group’s co-chairs — namely Russia, the US and France — was simply not fair, adding that decades-long talks had not born any fruit for Baku.

Noting that Turkey was already a member of the Minsk Group and stood as an independent country capable of contributing to conflict-resolution across the region despite some Western countries’ reluctance to recognize this, he cited Ankara’s role in Syria and Libya as proof of his argument that Ankara could better contribute to resolving the issue if it became a co-chair of the Minsk Group.

Aliyev asserted that the Armenian military violated Saturday’s humanitarian cease-fire in the occupied region of Upper Karabakh, also known as Nagorno-Karabakh, and that the Azerbaijani army retaliated against these attacks. The cease-fire in Moscow was adopted for sake of humanitarian concerns and did not offer a full resolution of the conflict, he said.

According to the Azerbaijani president, Armenian forces targeted civilian settlements as Ganja — one of Azerbaijan’s most-populous provinces — via a missile strike that left civilians dead or wounded.

Armenian attacks on civilians within Azerbaijan’s borders revealed Yerevan’s true colors, said Aliyev, accusing Armenia of being a state of terror and fascism.

Moreover, disinformation campaigns aimed at harming Azerbaijan’s global reputation are doomed to fail as today’s sophisticated communication technology reflect what is going on in the region to the rest of the world, he added.

Stressing that the Azerbaijani army seeks to liberate its territories under occupation, Aliyev further noted that the conflict would come to an end if Armenian troops leave the occupied regions.

Lockdown puts education in Kashmir on back burner