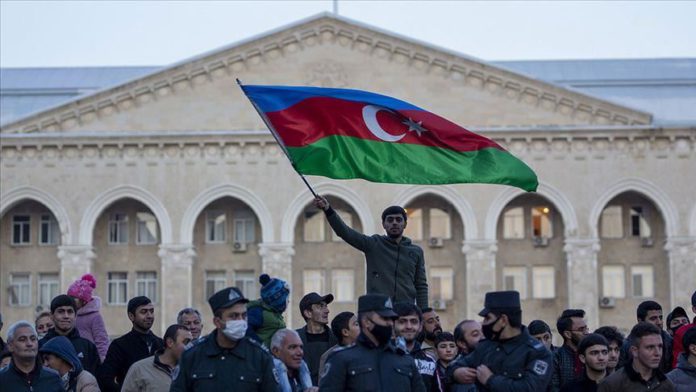 The traces of war are quickly being mended in the Azerbaijani city of Tartar, which had come under heavy bombardment during almost six weeks of fighting with Armenia.

Daily life in the city started returning to normal after a newly declared peace agreement was signed between Azerbaijan and Armenia.

Baku and Yerevan signed a Russia-brokered agreement on Tuesday to end clashes that erupted in September due to continued Armenian attacks on civilians and military forces in Azerbaijan.

The sides agreed to work towards a comprehensive solution to their dispute surrounding the region of Nagorno-Karabakh, also known as Upper Karabakh, which had been under Armenian occupation for almost three decades. Azerbaijani President Ilham Aliyev hailed the agreement as a victory for his country and a defeat for Armenia, saying Baku’s military success enabled it to gain the upper hand to end the occupation of its territory.

Relations between the ex-Soviet republics have been tense since 1991, when the Armenian military occupied Nagorno-Karabakh, a territory recognized as part of Azerbaijan, and seven adjacent regions.

Residents of Tartar gathered at the city’s Clock Square, which had suffered intense attacks by Armenian forces, to clean and sweep the streets.

Shopkeepers cleaned the debris of their broken windows and opened shop.

Banovshe Huseynova, one of the municipality workers cleaning the streets, told Anadolu Agency that she was happy that her country won the fighting over the Upper Karabakh.

Fresh clashes had erupted on Sept. 27, and the Armenian army continued its attacks on civilian and Azerbaijani forces, even violating humanitarian cease-fire agreements, for 44 days.

At the frontline, Baku liberated several cities and nearly 300 of its settlements and villages from Armenian occupation during this time.

“We are sweeping the streets of Tartar. We clean the streets and are very happy. Azerbaijan has won a great victory. It’s beautiful,” said Huseynova.

“He didn’t abandon us. May Allah help the people of Turkey,” she said.

Emphasizing that Tartar’s residents had had a “hard time” during the clashes, Gahramanova said they had been too afraid to leave their homes for a long time, but that they would not leave their homeland.