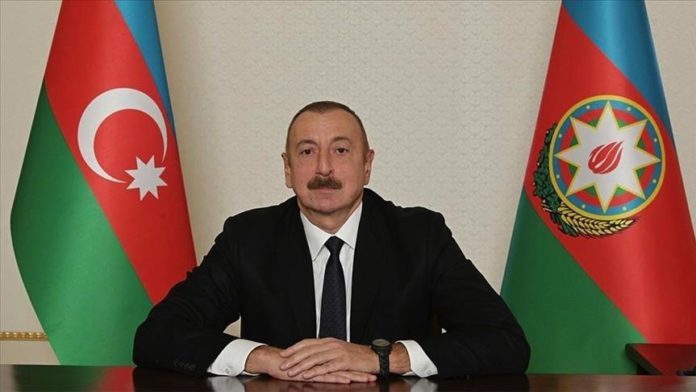 Azerbaijani leader announced that the nation will celebrate Victory Day every year on Nov. 8, according to the country’s presidency on Thursday.

On Wednesday, President Ilham Aliyev declared Nov. 10, the day when Armenia accepted defeat and ended six weeks of fighting in the Karabakh region, as Victory Day.

However, taking into account that the Mustafa Kemal Ataturk’s death anniversary is commemorated in Turkey on Nov. 10, Aliyev decided to change the date of Victory Day into Nov. 8, when Shusha — known as the pearl of Karabakh — was liberated after the nearly three-decade-long Armenian occupation.

Meanwhile, Ataturk’s “the joy of Azerbaijan is our joy, sorrow is our sorrow” statement is also known to be inscribed in golden letters in the history of the Turkic world.

The liberation of Shusha was a triumph of the combat determination and played a decisive role in the fate of the second Nagorno-Karabakh war, or Patriotic War, and led to the recognition of defeat by the Armenian Prime Minister Nikol Pashinyan, as well as the cessation of the hostilities between Baku and Yerevan.

Aliyev has also signed an order on the commemoration of martyrs of the Patriotic War.

Based on the Presidential Order, on Dec. 4 at midday, a minute of silence will be observed across the country to pay tribute to martyrs of the Patriotic War who sacrificed their lives for the territorial integrity of the country.

A total of 2,783 Azerbaijani soldiers were martyred in the Upper Karabakh war waged by the army to liberate its lands from the Armenian occupation, Azerbaijan’s Defense Ministry said earlier on Thursday.

On Wednesday, Azerbaijani leader also designated Sept. 27, when Baku began an operation to liberate its lands from occupation as a “Memorial Day” for the martyrs.

Nagorno-Karabakh, also known as Upper Karabakh, and seven adjacent districts, is the territory internationally recognized as part of Azerbaijan but was under the illegal occupation of the Armenian forces since the early 1990s.

Forty-four days of clashes ended with a Russia-brokered truce, and Azerbaijan managed to liberate five city-centers, four towns and 286 villages amid the heavy fighting. Yerevan was forced to evacuate the cities of Aghdam, Lachin and Kalbajar as part of the cease-fire.

Meanwhile, the Turkic nation is gearing up for a military parade at the Azadliq (Independence) Square in Azerbaijan’s capital. Armored vehicles and other weapons captured from the Armenian army will be displayed.

An official announcement regarding the date of the ceremony, however, has not yet been made.

US: Secretary of state hails confirmation of UN envoy

UEFA to hold video meeting for rescheduling of games