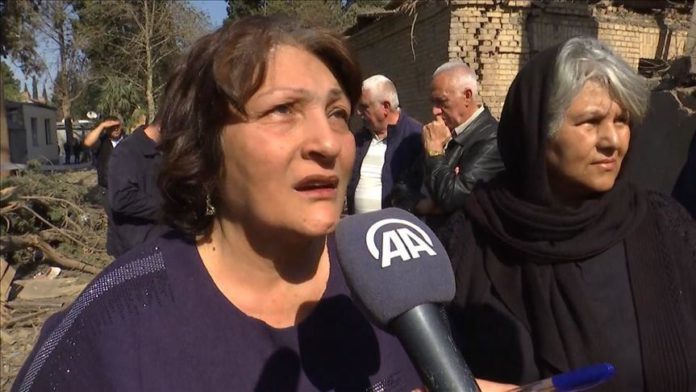 Azerbaijani mothers in the country’s second-largest city Ganja urged the Armenian mothers to take their children out of the Nagorno-Karabakh conflict area.

The mothers of children, who were injured in recent medium-range ballistic missile attack of the Armenian forces, told Anadolu Agency how they rescued children from debris following the overnight attack.

The missile strike by Armenian forces at around 2 a.m. local time Sunday (2200GMT Saturday) on Ganja, located outside the frontline zone, within 24 hours of the truce violated a tentative cease-fire between the two sides, leaving at least 10 people dead and 35 others wounded, including women and children.

Nushaba Haydarova, a resident of an apartment, said the rubble and debris fell on their heads when the house was attacked, and they pulled out their kids from the debris with their bare hands.

“The babies and children are innocent. They still don’t understand what’s happening in their lives. May Allah save all children!” she said.

Noting that she does not want any mother to cry elsewhere, even in Armenia, Haydarova said she would like to address the Armenian mothers and to tell them: “Armenian mothers, have mercy on your own children. The lands of [Upper] Karabakh are our lands, we’re fighting for the sake of our own lands.

Gunay Jafarova, one of those mothers whose two children were injured — including one seriously wounded — in the attacks, said she hopes nothing happens to children, and that she wants everyone’s children to be safe.

Referring to the Armenian side, she said: “May they have the heart to avoid [attacking] civilians. We want just our own lands, we don’t want anything [else] from them. We want them to leave our lands. We want them to not harm civilians. That disaster we witnessed in the middle of the night, was that the fault of the babies?”

Jafarova called upon Armenian mothers to “act with justice.”

‘Mother not to shed tears for their children’

Elmira Gurbanova, whose 3-year-old granddaughter Maryam was injured in a missile attack on her apartment, said she never wanted any Armenian mothers to shed tears for their children.

“They are also mothers. But they should see who’s right here,” she said.

Emphasizing that Armenian forces occupied the Azerbaijani lands, including the Upper Karabakh area, Kurbanova said: “They occupied our lands. Such savagery … it looked like the [1992] Khojaly genocide. How can rockets be fired on people, the elderly, babies, while they are sleeping? … They are also mothers, and should understand that this could happen to their children as well.”

She also wished the Armenian mothers to take their children aside from the conflict zone and peacefully return the lands to Azerbaijan.

“May they understand that war never brought good to anyone. The [Armenian] mothers should all come together and urge [Prime Minister Nikol] Pashinyan to withdraw their children from Nagorno-Karabakh.

Armenian forces have been killing Azerbaijani people for nearly 30 years, Kurbanova said, and urged the political and military leadership of Armenia to stop attacking babies, elderly mothers, and suffering women.

At least 42 civilians in Azerbaijan have lost their lives, while 206 others sustained injuries in Armenian forces’ attacks on civilian settlements, Azerbaijan’s Prosecutor General’s Office said on Tuesday.

In a statement, the office said 479 houses, 66 apartments, and 241 public buildings have become unusable due to the attacks carried out by Armenia on Sept. 27-Oct. 13.

But Armenian forces launched a missile strike on Ganja — although the region is outside the frontline zone — resulting in civilian casualties.

'Fate of world's Muslims not in hands of 5 countries'