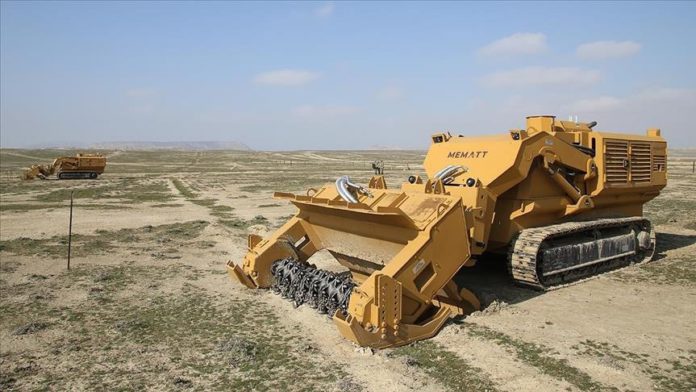 The Turkish National Defense Ministry said last week on Twitter that an air force cargo plane had departed for the Azerbaijani capital Baku with 20 units of mechanical minesweeping equipment.

MEMATT (Mechanical Mine-Clearing Equipment) minesweepers manufactured by Turkey’s state-owned ASFAT will soon be used by Azerbaijan in the territories its army recently liberated from the occupation of Armenian forces, according to Maj. Gen. Anar Karimov, the head of the engineering and fortification service of the Azerbaijani Defense Ministry.

The minesweepers will be both less time-consuming and safer in mine-clearing operations, Karimov told reporters, adding that MEMATT has superior technical features compared to other demining machinery.

In the test conducted in the exercise area near Baku, the mine-clearing equipment was successful in detonating all the mines laid in the field.

Following the tests, certificates were presented to the personnel who will use the equipment.

Gokhan Kus, the head of ASFAT Land Programs, who was attending the tests, emphasized that they are proud of the fact that MEMATT, an indigenous mine-clearing vehicle, is simultaneously brought into the service of both the Turkish army and the army of friendly and brotherly Azerbaijan.

“Azerbaijani officials were very pleased. We did not receive any negative feedback,” he said.

Yasin Arslan, an ASFAT expert, said that MEMATT, a top-notch unmanned mine-clearing equipment, scored over 95% of success in mine tests conducted in Turkey.

He also underlined that MEMATT has a high resistance to explosions, and it is faster, reliable, and minimizes loss of life.

Relations between the former Soviet republics of Azerbaijan and Armenia had been tense since 1991 when the Armenian military occupied Nagorno-Karabakh, also known as Upper Karabakh, internationally recognized as Azerbaijani territory, and seven adjacent regions.