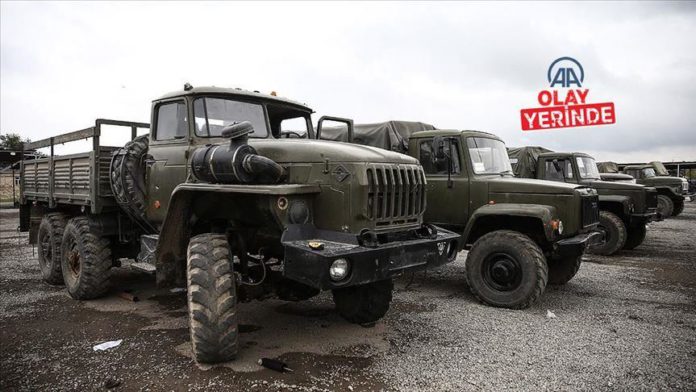 Russian-made personnel and load carriers belonging to the Armenian army were brought to Azerbaijan’s military base in Yevlakh province, located some 265 kilometers (around 165 miles) west of the capital Baku.

The military vehicles were seized in village of Talish near Sugovushan, which had previously been occupied by Armenia, according to an Azerbaijani officer who spoke to Anadolu Agency on condition of anonymity.

Noting that the Armenian soldiers left behind many military vehicles and ammunition during Azerbaijan’s recapture of the area, the officer explained that the vehicles brought to the base were only a part of the total seized materials.

Documents, uniforms, combat boots, helmets and personal belongings were found in the vehicles captured during the operation.

President Ilham Aliyev announced on Oct. 3 that Azerbaijani soldiers hoisted the country’s flag over Sugovushan — occupied by Armenia since 1994 — following its liberation from the occupying forces.