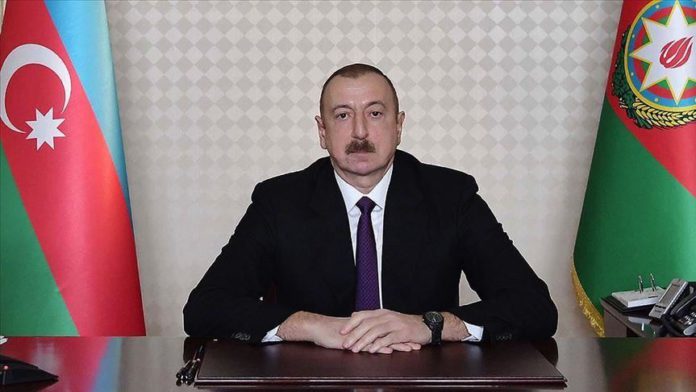 Azerbaijan’s president said Monday they have avenged the martyrdom of their soldiers in border clashes with Armenian troops.

“Another provocation of Armenia was prevented. An appropriate response was given,” Ilham Aliyev said, speaking at a meeting with top security officials via videoconference after four Azerbaijani soldiers were martyred and as many injured.

On Sunday, Armenian forces violated an ongoing cease-fire and targeted positions of Azerbaijan’s army in the northwestern Tovuz district resulting in the casualties.

The blood of our servicemen and martyrs will not go in vain, he said.

Aliyev said the gallant soldiers of his country protected the border and that Armenian troops “could not cross even a single centimeter into Azerbaijani territory”.

He said the situation at the border remains tense and the military and political leadership of Armenia is to blame for this.

“This ugly and insidious policy will lead Armenia to the abyss,” he said.

He went on to say that Baku will continue protecting its territorial integrity as was seen in the “crushing strikes” inflicted on the Armenian side over the past two days.

Aliyev also wished Allah’s mercy upon the martyred soldiers and wished early recovery for the wounded.

He reiterated that Upper Karabakh is an integral and historical part of Azerbaijan.

Turkey earlier on Monday condemned the attack on Azerbaijani soldiers, adding that it stands with Baku in these difficult times.

Azerbaijani Foreign Minister Elmar Mammadyarov and his Russian counterpart Sergei Lavrov in a phone call also discussed the latest situation on the border.

Mammadyarov noted that Armenia’s provocation served to further aggravate the situation in the region and to include third countries in the Armenia-Azerbaijan conflict.

The Russian Foreign Ministry in a statement called on the conflicting parties to exercise restrain and establish a cease-fire.

April 12, 2020
We use cookies to ensure that we give you the best experience on our website. If you continue to use this site we will assume that you are happy with it.Ok