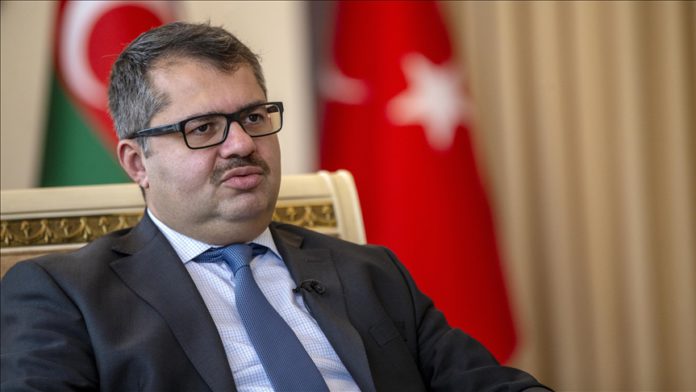 Azerbaijan owes its victory over the Armenian forces in Karabakh to the nation’s unity and solidarity, the country’s envoy to Turkey told Anadolu Agency in an exclusive interview.

During the 44-day war — which erupted with new clashes on Sept. 27 — Azerbaijan liberated several cities and nearly 300 settlements and villages from the nearly three-decade-long Armenian occupation.

“The victory through solidarity among the Azerbaijanis all around the world was the most critical issue for us. Restoration of Azerbaijan’s territorial integrity demonstrated that we are one, and every Azerbaijani was united around the country, around the president, commander in chief, and our soldiers, and therefore we achieved what we achieved,” said Khazar Ibrahim, Azerbaijan’s ambassador to Ankara, marking the World Azerbaijanis Solidarity Day on Dec.31.

Noting that 2020 was “a very tough year”, Ibrahim said the Solidarity Day will be “different” this year in terms of people’s gatherings and celebrations due to the novel coronavirus restrictions.

“We really need to take a very cautious approach in how we are celebrating during COVID-19 pandemic. Nobody, not a single country is immune or was immune from COVID-19 pandemic effects on the society, on the life of people,” he said.

Azerbaijan’s long-awaited victory came after almost three decades, during which the country developed and strengthened itself under the leadership of President Ilham Aliyev, the envoy said.

“Definitely, that was a historic moment. What can one feel who lived through the period when our territories were occupied illegally by military means through ethnic cleansing, massacre and genocide of Azerbaijanis?”

The ambassador stressed that the occupation of nearly 20% of Azerbaijan’s lands since the early 1990s affected the life of every Azerbaijani.

“For all the 30 years, we lived by our leadership, by the president, we strengthened our society economically, militarily, society-wise, who educated ourselves, and we knew that the day will come, and everybody had to know that we had the full, complete right to restore our territorial integrity,” he said.

Ibrahim emphasized that Baku “did what it did” because it was right, and had the strength to restore the country’s territorial integrity.

“The feelings are overwhelming, but we’re moving forward. And as [Azerbaijan’s] president said, we will turn the territories which were under illegal military occupation, which were absolutely destroyed, which look like Stalingrad during World War II, into the paradise.”

Azerbaijani envoy hailed the Turkey-Azerbaijan brotherhood and Ankara’s stance by Baku during the Nagorno-Karabakh conflict and recent war with Armenia.

“Turkey stood by Azerbaijan by far, by the most depth, as one nation two states,” he said.

He went on to say that Turkey’s people, government and “every single segment of the society” supported Azerbaijan’s just cause.

“The world sees very clearly that Turkey and Azerbaijan are one, and, therefore, my message to the people of Turkey will be the same. Where are one, we’re always together, and nobody, nobody can stand against us,” he concluded.