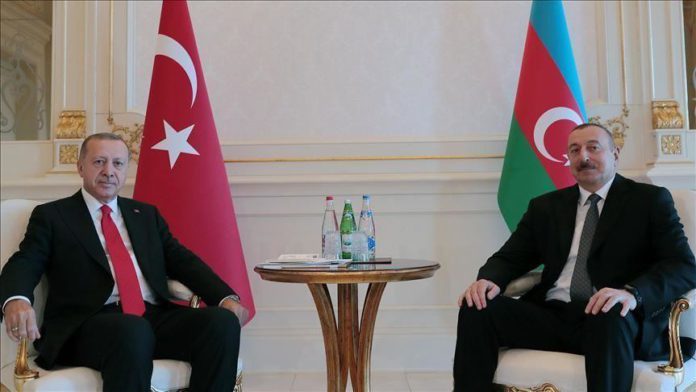 Azerbaijan’s president on Friday spoke over the phone with his Turkish counterpart and said his country is ready to help Turkey after a powerful quake jolted the Aegean region.

Ilham Aliyev expressed his sorrow during the conversation with Recep Tayyip Erdogan, according to a statement by Azerbaijan’s presidency.

Underlining that Azerbaijan always stand by brotherly and friendly Turkey, Aliyev said his country is ready to provide all possible assistance to the brotherly country.

Noting that Turkey always stands by Azerbaijan over Upper Karabakh issue, Asadov extended get well soon wishes to the people affected by the quake.

Meanwhile, Turkey’s foreign minister said the first call he received following the earthquake was from Azerbaijan.

“I would like to thank my brother Kamaladdin Heydarov, Minister of Emergency Situations of dearly Azerbaijan, who was the first to call right after the earthquake in Izmir and stated that they were ready to help while conveying their get well soon wishes,” Mevlut Cavusoglu said on Twitter.

At least six people were killed and more than 300 others injured in Turkey’s western Izmir province after the powerful earthquake jolted the Aegean region on Friday, according to the country’s Disaster and Emergency Management Authority (AFAD).

Izmir Governor Yavuz Selim Kosger said that so far 70 people have been rescued from debris.

The National Defense Ministry has established a crisis desk in the wake of the earthquake, and two military helicopters are taking part in search and rescue efforts.

Turkish search and rescue teams are continuing their work on the field.

The National Observatory of Athens, Institute of Geodynamics initially put the magnitude of the quake at 6.6 but later revised it to 6.7. The quake struck northwest of the Greek island of Samos in the Aegean Sea, said the observatory.