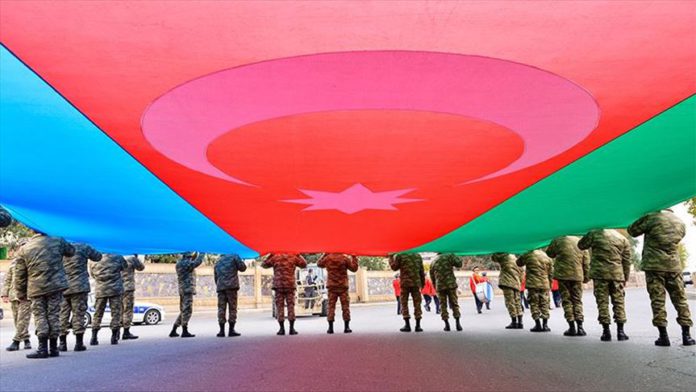 Azerbaijan on Monday celebrated the 102nd anniversary of its national flag after more than a month of gains in its efforts to liberate lands under nearly three decades of Armenian occupation.

“Happy National Flag Day to brotherly Azerbaijan! The glorious Azerbaijani flag is waving again in the lands liberated by its heroic army. Live in happiness with your tricolor flag, dear AZERBAIJAN!” Cavusoglu said.

Present-day Azerbaijan is considered the successor of the ADR, which claimed to be the first secular and democratic Muslim-majority country.

“The flag once raised will never fall!” became the motto of the country’s independence struggle in the 20th century. They were the words of Mammad Amin Rasulzade, a statesman, prominent public figure and a founder of ADR.

In 1991, when Azerbaijan regained its independence from the Soviet Union, the country’s Supreme Council announced on Feb. 5 that the blue, red and green flag with an eight-pointed star and crescent would be the new republic’s national flag.

On Nov. 17, 2009, President Ilham Aliyev signed a decree to declare Nov. 9 the National Flag Day of the country. The day was also declared an official holiday.

Floyd protests in US are outcry against Trump: Analysts