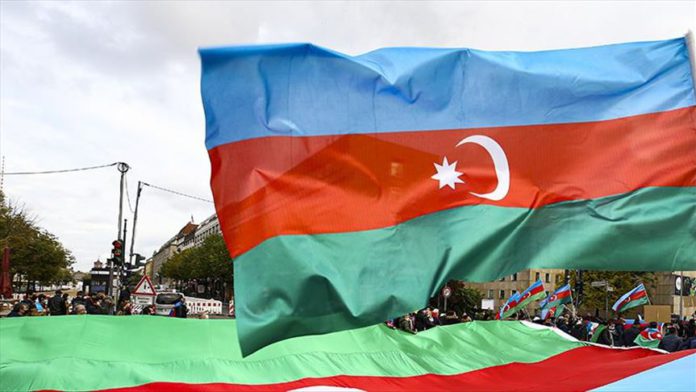 Azerbaijan on Sunday is marking the 29th anniversary of its independence with both pride and sorrow, as it comes in the wake of deadly attacks on civilian settlements by neighboring Armenia and amid Azerbaijan’s longstanding struggle to liberate occupied territories.

Azerbaijan declared independence not once but twice in the 20th century, overcoming many challenges along the way.

History proved to Azerbaijan that preserving its self-determination was far more difficult than first gaining its independence.

In 1918, with the fall of the Russian Czarist regime after the 1917 Russian Revolution, the newly founded Azerbaijani Democratic Republic blazed trails as the first secular and democratic parliamentary state in the Muslim East.

“The flag once raised will never fall!” is an expression emblazoned in gold in Azerbaijan’s national history by Mammad Amin Rasulzade, a statesman, prominent public figure, and the country’s founder.

But after barely two years of existence, the Azerbaijani Democratic Republic was toppled by the Soviet Union.

Fast-forwarding to 1991, after more than seven decades of large-scale industrialization and natural resource exploitation by the USSR, Azerbaijan had the second brilliant triumph in its political history when the country’s parliament moved to restore the state’s independence.

On Aug. 30, 1991, the Azerbaijani parliament, Ali Sovet (Supreme Council), adopted the Declaration on the State Independence of the Republic of Azerbaijan. This constitutional act was approved and adopted by the Supreme Council on Oct. 18, 1991.

On Dec. 29, independence was affirmed by a nationwide referendum, when the Soviet Union officially ceased to exist.

The country on the Caspian shore became a member of the UN on March 2, 1992, leading to wider recognition of Azerbaijan by the world community.

But the way to independence for Azerbaijan was never smooth.

Seen as the rebirth of the Republic of Azerbaijan, the violent crackdown known as Black January witnessed the massacre of more than 130 people and the wounding of hundreds of civilians by the Soviet army in the capital Baku and surrounding areas on Jan. 20, 1990, on the eve of the country’s independence.

On the night of Jan. 19-20, under direct instructions from Soviet leader Mikhail Gorbachev, the State Security Committee and Ministry of Internal Affairs entered Baku and nearby regions, massacring the civilian population using heavy military equipment and other weaponry.

Azerbaijanis refer to Black January as a day of sorrow, but at the same time, as a day of pride, because the country’s heroes who perished laid the groundwork for the state’s independence.

In the beginning of the 1990s, Azerbaijan was a naive post-Soviet country with no proper diplomatic missions, no budget, and no normally functioning state structures, but the state has since grown into the regional leader in the South Caucasus.

Especially since the end of the 1980s, Azerbaijan has been backstabbed by its malevolent neighbor, Armenia, which had designs on Azerbaijani lands, and in late 1991 to early 1992, the conflict entered a military stage.

During that time, having exploited the collapse of the Soviet Union and political instability in Azerbaijan caused by the internal standoff, Armenia began military operations in Upper Karabakh, or Nagorno-Karabakh, an internationally recognized territory of Azerbaijan, with external military support.

On Feb. 26, 1992, Armenian forces committed a massacre – known as the Khojaly Genocide – of ethnic Azerbaijanis from the town of Khojaly.

During the two-hour Armenian offensive, 613 Azerbaijanis – including 106 women, 63 children and 70 elderly people – were killed and 487 others critically injured, according to Azerbaijani statistics.

In May 1992, Armenian separatist forces occupied the Azerbaijani towns of Shusha and Lachin.

In 1993, the Armenian Armed Forces captured other Azerbaijani regions around Nagorno-Karabakh, including Kalbajar, Aghdam, Fuzuli, Jabrayil, Qubadli, and Zangilan.

In the years since, four UN Security Council resolutions and two from the UN General Assembly, as well as international organizations, demand the “immediate complete and unconditional withdrawal of the occupying forces” from the occupied areas of Azerbaijan.

In total, about 20% of Azerbaijan’s territory – including Nagorno-Karabakh and seven adjacent regions – has remained under illegal Armenian occupation for nearly three decades.

Today, nearly 30 years have passed since the occupation of Azerbaijani territories by Armenian forces.

Now, standing strong and confident as never before, Azerbaijan is ready to take back its own lands, and is set to grant the right to nearly 1 million internally displaced people to return to their homeland.

On Saturday, at least 13 civilians were killed, including two children, and 48 others injured, when the Armenian army attacked Ganja, Azerbaijan’s second-largest city, with missiles.

A hydroelectric power plant in Mingachevir was also targeted by the Armenian army early Saturday, but the missiles were neutralized by Azerbaijani air defense.

It was Armenia’s second deadly attack in less than a week on Ganja, an area far from the front line with a population of 500,000.

On Oct. 10, meeting in Moscow, Baku and Yerevan officials agreed to a cease-fire to allow for an exchange of prisoners and the recovery of bodies in Nagorno-Karabakh.

But before 24 hours had passed, the Armenian army had carried out its first missile attack on Ganja, killing 10 people, injuring 35 others.

As of last Saturday, Armenia in total had killed at least 60 Azerbaijani civilians and injured 270 more. The number of houses damaged in Armenian attacks reached over 1,700, along with 90 residential buildings and 327 civil facilities, according to Azerbaijani officials.

Azerbaijani President Ilham Aliyev has announced the liberation from Armenian occupation of Jabrayil, Fuzuli, and the Hadrut settlement, as well as more than 50 villages .

The Azerbaijani nation proved to the world that Muslims, Christians, and Jews could live, fight, and die together, side by side, with all ethnicities and cultures united under the unifying roof of multicultural Azerbaijan.