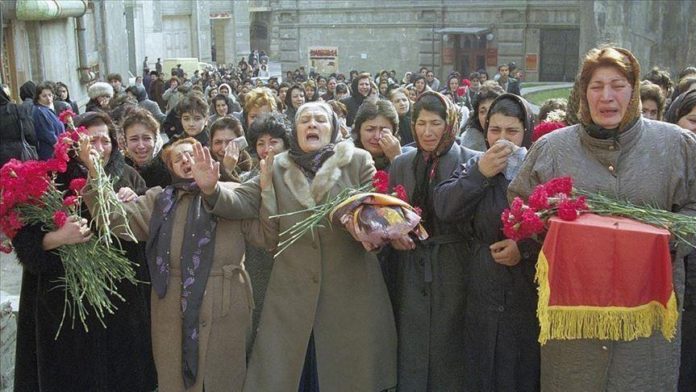 Azerbaijan on Wednesday is commemorating the 1918 genocide jointly committed by Armenian armed groups and Bolsheviks, which claimed the lives of around 50,000 Azerbaijani people.

In remembrance of March 31 — known as the Day of Genocide of Azerbaijanis — Anadolu Agency compiled information on the crimes committed against the Azerbaijani nation over the past century.

“103 years ago in March-April 1918, massacres were committed in the city of Baku and other towns and districts of the Baku Province by the Armenian dashnak – bolshevik armed groups operating under the mandate of the Baku Council (Baku Soviet), and tens of thousands of civilians were killed only for their ethnic and religious affiliation,” the Azerbaijani Foreign Ministry said in a statement on Wednesday.

Armenian gangs took advantage of the collapse of Czarist Russia and joined hands with the Bolsheviks, a revolutionary party that was committed to the ideas of Karl Marx.

Stepan Shaumian, an ethnic Armenian appointed as the commissar extraordinary for the Caucasus by Vladimir Lenin, the head of the Russian Bolsheviks, admitted that 6,000 armed soldiers of the Baku Soviet and 4,000 from Dashnaktsutyun, or the Armenian Revolutionary Federation — a nationalist and socialist party, participated in the massacre of the Azerbaijani people, the statement said.

“The March massacres of 1918 were a well prepared and ruthlessly implemented act by radical nationalist Armenians against Azerbaijanis on the grounds of racial discrimination and ethnic cleansing,” it added.

From March 30 to April 3, 1918, the genocide carried out against the Azerbaijanis covered not only the current capital city of Baku but also many other regions, including Shamakhi, Guba, Khachmaz, Lankaran, Salyan, Hajigabul, Zangezur, Karabakh, and Nakhchivan.

“During the first five months of 1918, more than 16,000 people were murdered with utmost cruelty in Guba province alone; a total of 167 villages were destroyed,” the ministry added.

The statement went on saying that the mass graves discovered in Azerbaijan’s northern Guba region in 2007 constitute “clear evidence of the inhumane acts committed by Armenians.”

On Sept. 15, 1918, an elite Ottoman force — called the Islamic Army of the Caucasus under the leadership of Nuri Pasha (Killigil) — was sent to Azerbaijan in the final months of World War I, right after Azerbaijan’s plea to the Ottoman Empire, along with the Azerbaijani National Army and volunteer forces, and liberated Baku from Armenian and Bolshevik occupation, paying the noble price of 1,132 martyrs.

Baku’s liberation paved the way for the transfer of the capital from Ganja to Baku and ensuring the territorial integrity of Azerbaijan, and set the basis for its contemporary boundaries.

After the establishment of the Azerbaijan Democratic Republic, also known as the Azerbaijan People’s Republic, on July 15, 1918, the government formed the Extraordinary Investigation Commission to probe the serious crimes perpetrated by Armenians.

A special group had been established under the Foreign Ministry to convey the true facts about these events to the world.

In 1919 and 1920, the Azerbaijan Democratic Republic commemorated March 31 as a national day of mourning, which marked the first attempt to give political recognition to the genocide against Azerbaijanis.

The commission, comprised of the best lawyers of that time representing various nationalities — Russians, Jews, Poles, Georgians, and even Armenians — launched criminal cases based on the evidence against 194 individuals accused of crimes against the peaceful population, and as a result, 24 individuals in Baku and about 100 in the Shamakhi region were arrested.

However, the process had been halted after the Azerbaijan Democratic Republic was toppled after almost two years by the Soviet Union, and a full investigation of the tragic events and their political and legal assessment had been prevented.

Although many years passed, the bloodshed had not been forgotten, and after the restoration of Azerbaijan’s independence in 1991, then Azerbaijani President Heydar Aliyev in 1998 declared March 31 as the Day of Genocide of Azerbaijanis.

The people and government of Azerbaijan continue to pay tribute to the victims of the genocide and mark March 31 every year at the state level.

The mass settling of Armenians in historical Azerbaijani lands mainly started after the division of country’s lands as a result of the Russo-Persian wars of 1804-1813 and 1826-1828, while the Russian victories in both wars had an impact on the conclusion of treaties.

Right after the Turkmenchay Treaty, Russian Emperor Nicholas I on March 21, 1828 declared the establishment of an “Armenian province” in the territory of the Iravan and Nakhchivan khanates of Azerbaijan.

Thereafter, in accordance with the same treaty, the resettlement of Armenians from Iran to Iravan, Karabakh and Nakhchivan was carried out. The purpose of these resettlements was to force Azerbaijanis to leave their homelands.

The crimes committed by Armenian Dashnak nationalists in 1905 and 1918 with the support of Imperial Russia and the Bolsheviks, the stage-by-stage transfer of Azerbaijani territories to Armenia in the 1920s and the deportation of Azerbaijani people from Armenia in 1948-1953 at the decision of the Soviet government along with many other acts of militant Armenian chauvinists were carried out under a special scenario for the creation of “Greater Armenia.”

Since the late 1980s, with the unleashing of the war against Azerbaijan and occupation of its territories, Armenia continued the policy reminiscent of the March 1918 massacre by carrying out the ethnic cleansing of hundreds of thousands of Azerbaijanis in Armenia, seizing lands of Azerbaijan and committing numerous war crimes, crimes against humanity and acts of genocide.

The latest crimes provoked by Armenian leadership and the Soviet Union’s separatist actions led to the occupation of Azerbaijan’s internationally recognized territories.

Since 1991, the Armenian military occupied Nagorno-Karabakh, also known as Upper Karabakh, a territory internationally recognized as part of Azerbaijan, and seven adjacent regions.

On Feb. 26, 1992, on the heels of the Soviet Union’s dissolution, Armenian forces took the town of Khojaly in Karabakh after pounding it with tank and heavy artillery fire assisted by an infantry regiment and committed a massacre against over 600 Azerbaijani civilians in the area.

During the 44-day conflict, which ended in a truce on Nov. 10, 2020, Azerbaijan liberated several cities and nearly 300 settlements and villages in Karabakh from a nearly three-decade occupation.

The two countries signed a Russian-brokered agreement last November to end the fighting and work toward a comprehensive resolution.

Before the victory, about 20% of Azerbaijan’s territory had been under illegal Armenian occupation for nearly 30 years.

Over 300,000 displaced in Idlib: Turkish official