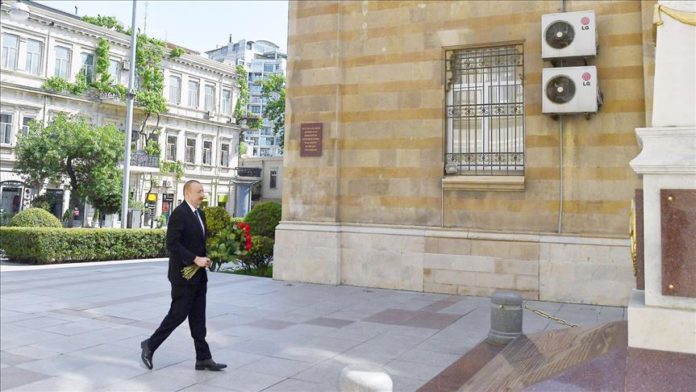 Azerbaijan marked on Thursday the 102nd anniversary of its Republic Day.

As part of the celebrations, President Ilham Aliyev attended the ceremony held in front of the Republic Monument and laid a wreath.

On May 28, 1918, the Azerbaijani National Council, headed by Mammad Amin Rasulzadeh, declared the independent Azerbaijan Democratic Republic, in Tbilisi, Georgia.

The same year, Ottoman Empire and newly formed Azerbaijan signed an agreement of friendship and cooperation. Rasulzadeh inked the agreement on behalf of Azerbaijan.

Later in 1918, the Islamic Army of the Caucasus took Baku from Armenian gangs and Bolsheviks.

Azerbaijan first declared independence from the Russian Tsar regime but was occupied by the Soviet Union after a short period of two years.

Regarded as the first democratic republic of the East, Azerbaijan made reforms in many fields including freedom of education, religion and conscience.

In the Declaration of Independence, the country granted equal rights to all citizens, regardless of race, religion, sect or gender.

Mercenaries back in Sirte: Libyan army