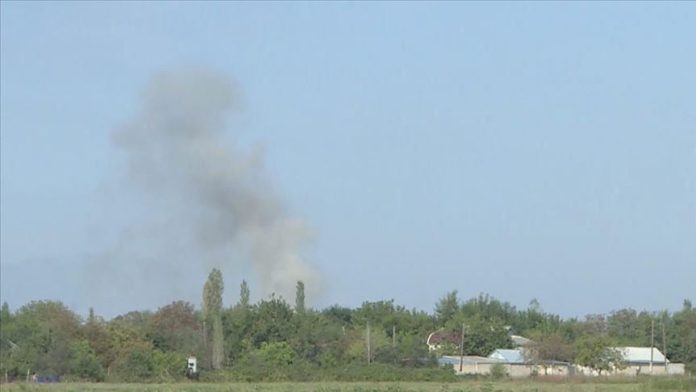 The Azerbaijani army liberated some critical points in the western Agdere province from Armenian occupation as border clashes entered their sixth day, the country’s Defense Ministry said on Friday.

The ministry said in a statement that the Azerbaijani army forced the Armenian army to withdraw from the Jabrayil-Fizuli region, adding that some strategic hills in Agdere’s Madagiz region were also liberated from occupation.

During a night clashes, five Armenian armored vehicles were destroyed and a large number of soldiers neutralized, it said.

The ministry said volunteers brought from Armenia to the occupied areas refused to fight, fearing the intensity of the conflict and heavy losses.

The success in clashes and the liberation of various strategic positions boosted the fighting spirit and determination of the Azerbaijani soldiers, it underlined.

Another ministry statement said Armenian forces targeted the villages of Hindiristan, Alibeyli, Ahmadaghali and Safarli in the southwestern Agdam province.

Underscoring that Armenia carried out rocket attacks on Azerbaijani territories from the Gorus region, it said Azerbaijan will make the necessary retaliatory response.

Azerbaijan’s parliament declared a state of war in some of its cities and regions following Armenia’s border violations and attacks in occupied Upper Karabakh, also known as Nagorno-Karabakh.

US to try to end violence between Armenia, Azerbaijan