TurkishPress
Home News Azerbaijan is right in its cause: Turkish VP 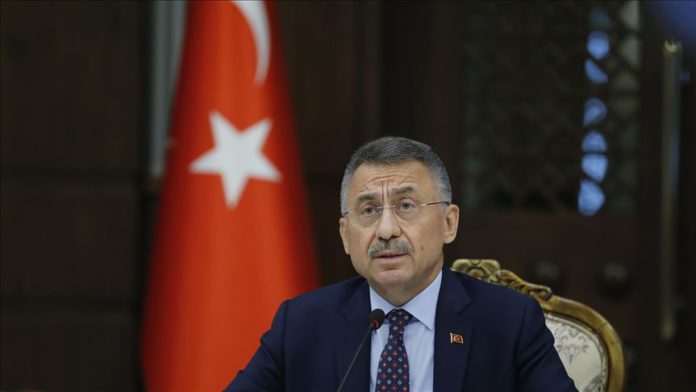 Azerbaijan is right in its cause and is defending its own lands while Armenia is an occupier and has to withdraw from the territories it occupied, Turkey’s vice president said Wednesday.

In an interview with CNN Turk, Fuat Oktay said Turkey will not hesitate to provide military support to Azerbaijan as part of military cooperation agreements between the two countries if Baku makes such a request.

Noting that Azerbaijan has liberated more than 100 settlements from the occupying forces, Oktay further stressed that Armenia must withdraw from the lands it occupied, including seven regions and Nagorno-Karabakh.

He said there is a terrorist state that attacked civilians right after the latest cease-fire signed with Azerbaijan.

“As a matter of fact, it is not possible for the Armenian economy and army to endure this for a long time. The only way this can continue is if there is illegal support from outside.”

He also stressed that PYD/PKK terrorists from Syria were brought to the region, noting that Turkey has documentary proof of the matter.

Oktay also said that French President Emmanuel Macron’s accusations against Turkey should not be taken seriously, adding he tries to promote and position himself in the EU as its leader though no one takes him seriously.

Underscoring Turkey’s determination, Oktay said it will never cede a piece of land from its territories or drop of water from its seas not only to Greece but to anyone.

Relations between the two former Soviet republics of Azerbaijan and Armenia have been tense since 1991, when the Armenian military occupied Upper Karabakh, also known as Nagorno-Karabakh.