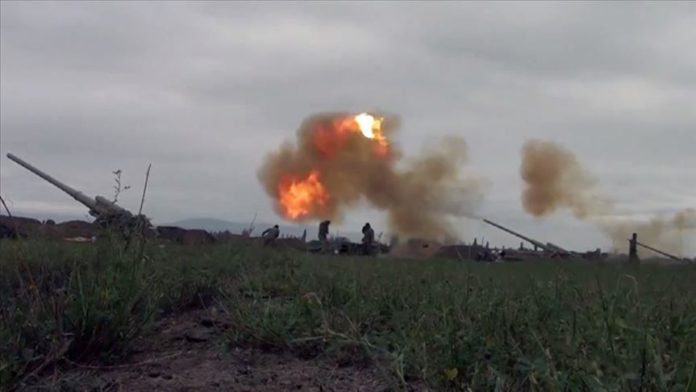 Azerbaijan has a legal right to self-defense and this right can continue until the liberation of all occupied territories, according to Article 51 of the United Nations, experts stated after Armenia’s attacks.

Prof. Yucel Acer, head of International Law Department at Ankara Yildirim Beyazit University, reminded that the United Nations Security Council (UNSC) called on Armenia to withdraw from the territories it occupied and to have the Armenian groups in Karabakh comply with the United Nations (UN) resolutions.

Stating that neither the UN’s calls nor the negotiations carried out by the Organization for Security and Co-operation in Europe (OSCE) Minsk Group have yielded results, Acer said: “The unlawful situation regarding Azerbaijan’s occupied territories is not resolved. Also, hundreds of thousands of people displaced after the occupation cannot return to their homeland due to this unlawful situation.”

Highlighting Article 51 of the Charter of the United Nations regulating the rights of states to self-defense, Acer said: ”When there is a cease-fire agreement and a negotiation process is continuing, if Armenia carries out an armed attack, Azerbaijan does legally have the right to self-defense. This right can continue until the liberation of all occupied territories. At this point, the only legal factor that can stop the current armed defense of Azerbaijan may be the UN Security Council’s necessary measures.”

Prof. Selami Kuran, head of International Law Department at Marmara University in Istanbul, said that the OSCE Minsk Group has not taken any concrete steps for 30 years on returning Upper Karabakh to Azerbaijan, which is considered under occupation according to international law.

Stating that the UN Security Council has been involved in the event since 1993, Kuran said: “Four resolutions were issued by the UNSC that condemned Armenia within 7-8 months. However, if political, military sanctions or economic embargo had been imposed on Armenia as stated in articles 31, 40 and 41 of the UNSC, this occupation would have been ended. Unfortunately, they did not do this and they turned a blind eye to the invasion by Armenia.”

Kuran said inviting to peaceful settlement by giving ceasefire messages for 30 years is not helpful for solution of the conflict anymore. ”The duty of the UN is not to condemn or not to give a ceasefire message. It cannot move to the sanctioning stage, it tries to get out of the problem with some political statements. Armenia, which openly violates international law, is also encouraged by this. Therefore, Azerbaijan responds to invader Armenia per international law.”

Kuran also said that according to international law, the occupation of Upper Karabakh is an unjust attack on the territorial integrity and political independence of Azerbaijan. ”According to Article 51 of the UN, Azerbaijan has the right to reclaim its occupied territories. Baku is now using its legal right to self-defense. We strongly believe that it will succeed,” he added.

Istanbul Culture University’s faculty member, Prof. Hasan Koni, said that Russia, which was in a hurry to not lose the Caucasus during the dissolution of the Soviet Union, gave great political and military support to Armenia to keep the entire Black Sea and Caspian Sea line.

Noting that the status of Upper Karabakh according to international norms is controversial, Koni said: ”Armenia’s claims that its cognates living in Upper Karabakh chose to be an independent state by using the right to ‘self-determination’ is against history and international law. A minority in a country does not have the right to establish a state by separating it according to the law of nations. If an article is put in the constitution and a general referendum is held, only then there can be a separation. Upper Karabakh is Azerbaijani territory occupied by Armenia.”

Emphasizing that the OSCE Minsk Group was made dysfunctional by Russia in resolving the Upper Karabakh conflict, Koni said: ”If Armenia continues its attacks, Azerbaijan will use all its rights based on international law to reclaim Upper Karabakh because the right to self-defense arises. In such a situation, of course, there is a danger that other forces will step in. Therefore, I think this issue should be impeded with peaceful negotiations for a while.”

Retired international law lecturer Prof. Haluk Kabaalioglu pointed out that while discussing the tension between Azerbaijan and Armenia, it should be emphasized that a part of Azerbaijan’s territory is occupied according to international law.

One million people from Upper Karabakh, which was occupied by Armenia, had to flee to other regions in 1991-1993, many of them were killed by Armenia, Kabaalioglu said.

”In the international arena, these are still ignored. The response of Azerbaijan to the latest attacks as a sovereign state is in line with its right to self-defense based on the resolution of the UN Security Council. In line with this right, Azerbaijan may regain its occupied territories.”