TurkishPress
Home News Azerbaijan hands over 15 Armenian detainees in exchange for 92,000 mine maps 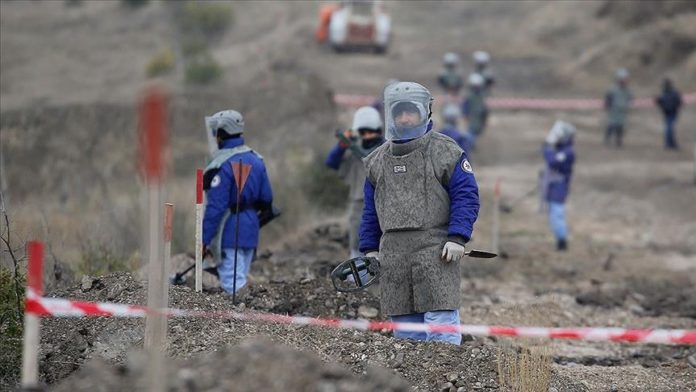 Azerbaijan handed over 15 Armenian detainees in exchange for maps of 92,000 anti-tank and anti-personnel mines planted during the occupation in the Fizuli and Zangilan regions, the country’s Foreign Ministry announced Saturday.

The maps were submitted by Armenia to Azerbaijan because of an initiative by Russia, said the written statement.

“We express our gratitude to Rustam Muradov, Commander of the Russian peacekeeping contingent temporarily deployed in the territory of the Republic of Azerbaijan, for his mediation services in the implementation of the humanitarian initiative to obtain mine maps,” it said.

The ministry also emphasized that obtaining the mine maps will save the lives of tens of thousands of Azerbaijanis, including those involved in mine clearance, and will accelerate the implementation of reconstruction and rehabilitation projects initiated by President Ilham Aliyev in the liberated territories, as well as the process of returning internally displaced persons.

“As a humanistic step, the Azerbaijani side handed over to Armenia 15 people of Armenian origin, who were imprisoned by the court’s verdict and the term of the imposed sentence has expired,” according to the statement.

Relations between the former Soviet republics of Armenia and Azerbaijan have been tense since 1991 when the Armenian military occupied Nagorno-Karabakh, also known as Upper Karabakh, a territory internationally recognized as part of Azerbaijan, and seven adjacent regions.

During a subsequent 44-day conflict which ended under a deal signed Nov. 10, Azerbaijan liberated several cities and nearly 300 settlements and villages from Armenian nearly three-decade occupation.

Number of coronavirus cases in Russia climbs to 2,337