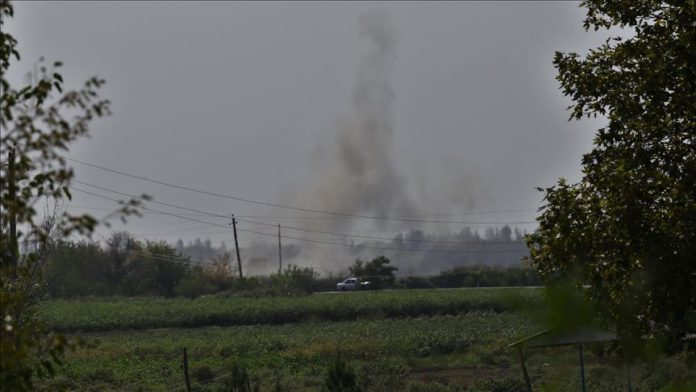 The Azerbaijani army liberated seven border villages from Armenian occupation, the country’s envoy to Turkey said on Sunday amid the latter’s latest violations in Nagorno-Karabakh region.

“Azerbaijani Armed Forces have liberated seven occupied villages of Azerbaijan in Fuzuli and Jabrayil [regions],” Khazar Ibrahim told Anadolu Agency over phone while elaborating the developments on the border.

This July, Armenian cease-fire violations martyred 12 Azerbaijani troops and wounded four others. Clashes in the region flared up again on Sept. 21 when an Azerbaijani soldier was martyred, and another injured.

The OSCE Minsk Group — co-chaired by France, Russia and the US — was formed in 1992 to find a peaceful solution to the conflict, but to no avail. A cease-fire, however, was agreed in 1994.

Ankara has strongly condemned the attack, and reiterated its full support to Baku.

Earlier speaking to reporters in Baku, Azerbaijan’s Defense Ministry Spokesman Lt. Col. Anar Eyvazov said the Karahanbeyli, Gervend, Koy Gerediz, Upper Abdurrahmanli villages of the Fuzuli region, and Buyuk Mercanli and Nuzgar villages of Jabrayil region, which had been occupied by Armenian forces for many years, were now under Azerbaijani army’s control.

He added that Azerbaijani forces also recaptured some strategic peaks in Agdere and Murovdag highlands, and that the operation is ongoing to free other settlements.

Meanwhile, Azerbaijan’s Security Council has convened under the chairmanship of President Ilham Aliyev.