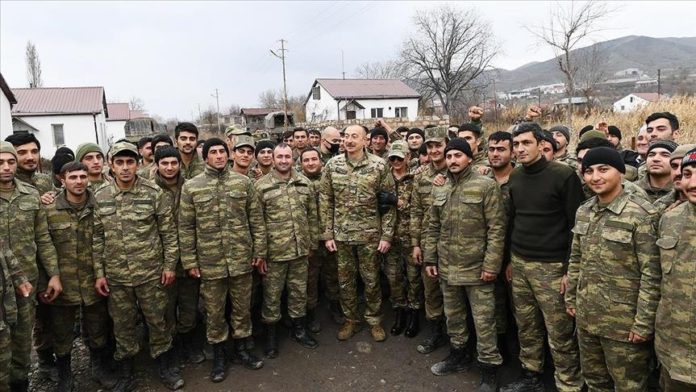 Azerbaijan’s President Ilham Aliyev has criticized UNESCO for turning a blind eye toward the destruction of religious and historical structures belonging to Azerbaijani people by Armenia.

He visited on Wednesday districts surrounding Nagorno-Karabakh — an area recently liberated by the Azerbaijani army from the nearly three-decade occupation of Armenian forces — along with first lady Mehriban Aliyeva.

Referring to the desecration of a mosque in Zangilan district, he said: “The enemy has insulted the religion and all the Muslims.”

Noting that much hue and cry has been raised in some international circles over the status of Armenian religious structures in the liberated lands, he said: “But why didn’t anyone raise the issue of our national and religious heritage?”

Aliyev said that as soon as the 44-day war with Armenia ended, UNESCO “started to protect” the sites of the Armenian people.

“We are protecting all sites, we are protecting the sites of all nations, and the world knows that. But you should have a look, there was a mosque here, UNESCO, come here, come and see this.

“The Council of Europe, do not remain silent, come and see this! All our mosques are destroyed.

He said Armenians kept pigs, a prohibited animal in Muslim faith, inside the mosque.

“Unfortunately, we are still hearing that some Muslim states call Armenia a friendly country. The executioners who ruled this ‘friendly country’ for 20 years have done this. They came here and destroyed our mosques and insulted us. The whole world should see this,” he said.

He said not a single safe building remains in the liberated areas.

He vowed to restore the mosque and open it for prayers.

“The call to prayer will come from here, and life will return to these lands,” he said.

Weeks-long clashes this fall ended with a cease-fire in November.