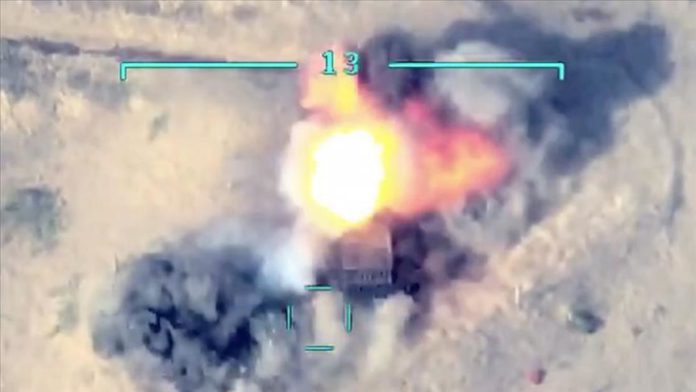 The ministry also shared footage of the destruction of several Armenian artillery pieces in the occupied territories of Azerbaijan.

“Jojug Marjanli village of Jabrayil region, Horadiz city of Fizuli region, frontline villages of Goranboy, Tartar and Aghdam regions are under artillery fire by the Armenian armed forces,” it said.

Hikmet Hajiyev, assistant to the president and foreign policy chief for Azerbaijan’s Presidency, said targeting or deliberately killing civilians in military operations is a war crime. “The Armenian state and the administration are responsible for this,” he said.

Noting that the Armenian army carried out missile and artillery attacks against Azerbaijan not only from the occupied areas but also from the Armenian border territory, Hajiyev warned Armenia if the attacks are not stopped, Baku will respond to military targets that opened fire on civilians.

Early Thursday, the territory of Azerbaijan was attacked with rockets from the Gorus region of Armenia, said the ministry. The rockets fired from Armenia hit the frontline in the Jabrayil-Fizuli area.

“We demand that Armenia immediately stop shelling the territories of Azerbaijan, and we warn that otherwise adequate responsive measures will be taken,” it said.

Azerbaijani officials also reported about Armenian army having “serious problems” in logistical support of their subunits, as well as suffering “heavy losses along the entire front” under attack by the Azerbaijan army.

“The concern of the Armenian military command is that the logistics officers, fearing to be hit by our units, refuse to deliver ammunition and fuel-lubricants to the foremost [frontline] units,” it said.

The Azerbaijani Defense Ministry also said that from Sunday morning to the evening of Sept. 30, “the enemy” suffered significant losses in manpower, military and combat equipment and was forced to retreat from previously taken positions and important areas of the terrain along the entire front.

During the night battles, the Azerbaijani army inflicted “crushing artillery strikes” on the positions of the Armenian armed forces stationed in occupied territories, said another report.

Meanwhile, in border clashes, the Armenian army also targeted journalists on duty in the region.

Since Sept. 27, during cross-border attacks by the Armenian army on Azerbaijan, many journalists survived a life-threatening situation.

On Sunday, a Turkish news team on duty — reporters from Anadolu Agency and TRT – escaped narrowly as the Armenian army fired mortar shells which landed within a 100-meter radius from the reporters’ work station.