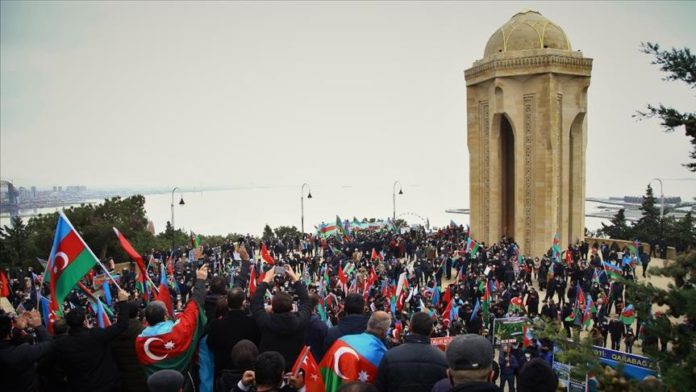 The Azerbaijani president on Wednesday declared Nov. 10, the day when Armenia accepted defeat and ended six weeks of fighting in the Karabakh region, as “Victory Day.”

Ilham Aliyev also designated Sept. 27, when Baku began an operation to liberate its lands from occupation as a “Memorial Day” for the martyrs.

Nagorno-Karabakh, also known as Upper Karabakh, is a territory recognized as part of Azerbaijan but was under Armenian occupation since the early 1990s.

Forty-four days of clashes ended with a Russia-brokered truce, and Azerbaijan managed to liberate five city centers, four towns and 286 villages amid the heavy fighting. Yerevan also promised to evacuate the cities of Aghdam, Lachin and Kalbajar as part of the cease-fire.

Meanwhile, the Turkic nation is gearing up for a military parade at the Azadliq (Independence) Square in the capital. Armored vehicles and other weapons captured from the Armenian army will be displayed.

An official announcement regarding the date of the ceremony, however, has not yet been made.