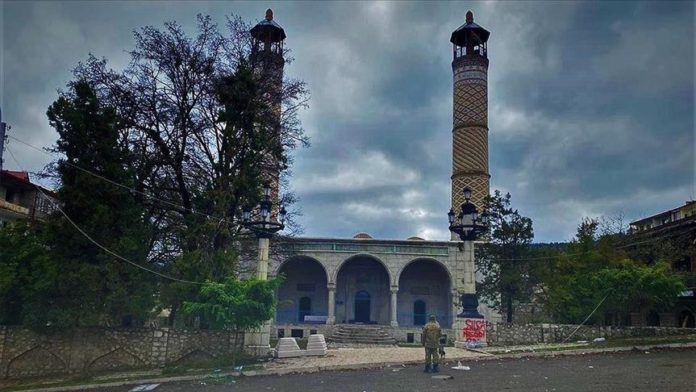 “I declare Shusha to be the capital of Azerbaijani culture. The city of Shusha deserves that. I think that it can be considered not only the cultural capital of Azerbaijan, but also of the entire region,” Ilham Aliyev said at a video conference with Culture Minister Anar Karimov.

The liberation of Shusha – known as the pearl of Karabakh – last Nov. 8 led to the recognition of defeat by Armenian Prime Minister Nikol Pashinyan, as well as the cessation of the hostilities between Baku and Yerevan.

Besides its strategic importance, Shusha – occupied by Armenia on May 8, 1992 – is known as a symbol of Azerbaijani history and culture. Many prominent Azerbaijani musicians and scholars were born in the city.

Aliyev reiterated that work has already begun to restore the city.

“The housing stock and historical sites must be inspected, the damage must be accurately calculated, and we must begin the restoration of Shusha. However, the original appearance and the historical image of Shusha must be restored without wasting time, but at the same time without haste,” he added.

Saying that during the occupation Armenian forces destroyed over 60 mosques, Aliyev added: “Pigs and cows were kept in the Aghdam mosque … Insulting inscriptions can be seen on the walls of the Aghdam mosque.”

Aliyev instructed the culture minister to organize music and poetry festivals in Shusha this year.

He highlighted that Azerbaijan will also build an international airport in Fuzuli province this year, adding that at least runways will be ready in 2021.

Aliyev also noted the 880th birthday of the famous 12th-century Azerbaijani poet and philosopher Nizami Ganjavi will be celebrated this year, adding that 2021 has been declared the Year of Nizami.

Last September, clashes erupted between the former Soviet republics of Armenia and Azerbaijan when the Armenian army launched attacks on civilians and Azerbaijani forces and violated several humanitarian cease-fire agreements.

During the 44-day conflict, which ended in a truce on Nov. 10, Azerbaijan liberated several cities and nearly 300 settlements and villages in Karabakh from a nearly three-decade occupation.