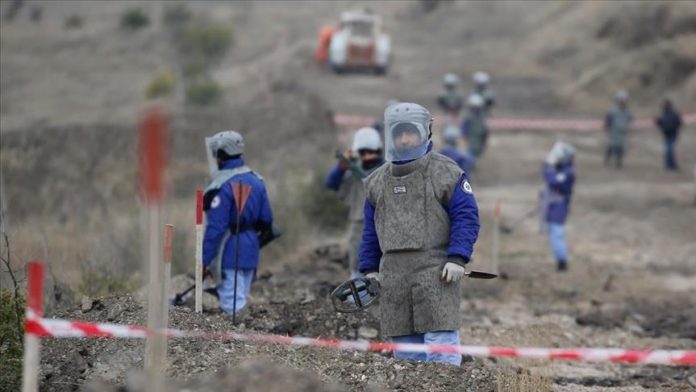 Azerbaijani experts continue demining the territories in Karabakh that were recently liberated from Armenian forces, officials said on Sunday.

Since Sept. 27 at least 750 unexploded missiles and rockets, 4,500 anti-personnel mines and 2,000 anti-tank mines have been found and destroyed, according to Idris Ismayilov, who is heading the operation under the Azerbaijan National Agency for Mine Action (ANAMA).

Mine-clearing and destruction operations on the 10-kilometer-long (6.2 miles) road between the cities of Tartar and Sugovushan have been continuing for 10 days, he told reporters, adding that up to eight kilometers (nearly 5 miles) have been completely cleared.

“We have neutralized 169 unexploded anti-tank and anti-personnel mines so far,” he said, adding that the rest of the road will be cleared soon and opened for the public.

Demining is carried out manually, through demining machines and with the help of mine detection dogs, he added.

As many as 584 personnel, 30 mine detecting dogs and six machines are involved in the action, according to ANAMA’s website.

“It will take up to 10 years to completely demine the territory but people would be able to return to their ancestral lands in between three and five years,” he said.

Armenia occupied Nagorno-Karabakh, also known as Upper Karabakh, a region recognized as part of Azerbaijan, as well as seven adjacent regions in the early 1990s.

Fresh clashes erupted late September, and continued until a Russia-brokered cease-fire was signed on Nov. 10.

While Azerbaijan liberated several cities and nearly 300 settlements and villages amid the heavy fighting, Armenians are also handing over other territories under the deal that is being monitored by both Russia and Turkey.