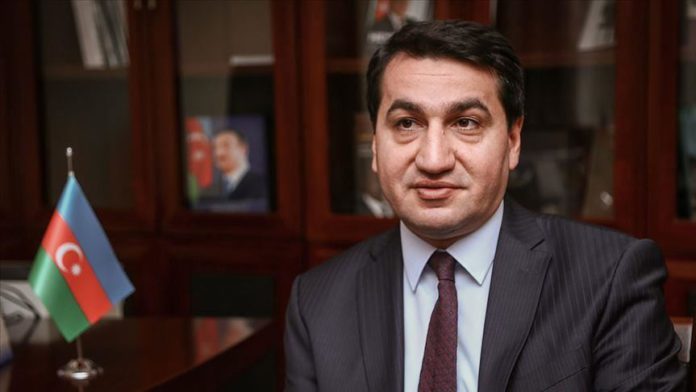 Azerbaijan on Monday voiced support for Turkey’s seismic activities in the Eastern Mediterranean, saying Ankara was protecting its rights.

Referring to Armenia’s provocative statement about the Treaty of Sevres and its position on the Eastern Mediterranean, Hajiyev said this was an attempt to intervene in issues that did not concern Yerevan.

The 1920 Treaty of Sevres, an unfair pact imposed on the Ottoman Empire after World War I, was replaced in 1923 by the Treaty of Lausanne — signed by Turkey on one side and Britain, France, Italy, Greece and their allies on the other — that recognized the modern Turkish state.

He said the country was trying to cover up its own occupational policies by accusing other countries.

“I think that everyone should know their place and should keep within bounds,” he said, adding that diplomacy was “a serious field” where there is no room for “irresponsible” statements.

“With such a statement, Armenia first of all humiliates itself. I’m sure Armenia has no news of the events in the Eastern Mediterranean and the only reason for the statement is that the subject is of interest to Turkey,” he said.

Turkey opposes Greece’s efforts to declare an exclusive economic zone in the Eastern Mediterranean based on small islands near Turkish shores, violating the interests of Turkey, the country with the longest coastline in the Mediterranean.

UNHCR getting overwhelmed by refugees fleeing from DR Congo