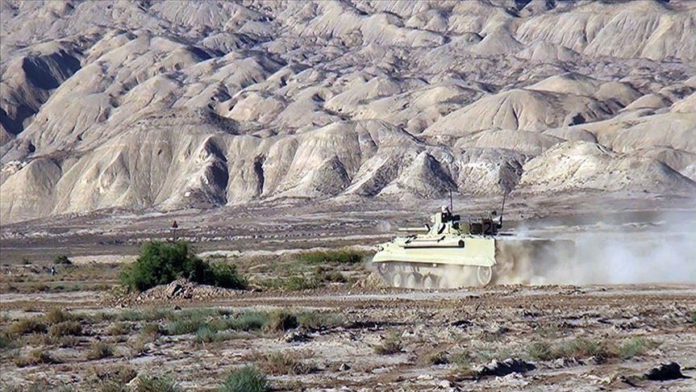 The Azerbaijani army continues its operation determinedly to save occupied territories from Armenia, a defense ministry spokesman said Thursday.

“Everything continues in accordance with the operation plan. Destination Karabakh,” Anar Eyvazov said at a news conference where he underlined that the army has not taken a step back from areas liberated from Armenian occupation.

Eyvazov said one unmanned air vehicle belonging to Armenia was shot down by Azerbaijani air defense units in the region near the Armenia-Azerbaijan border Thursday and Armenia’s military infrastructure and ammunition depots were hit with artillery.

He said an Armenian military convoy, which changed position of its forces, was destroyed by the Azerbaijani army. Ten tanks, six D-20 howitzers, one Akatsiya self-propelled howitzer and 30 vehicles belonging to Armenia were destroyed in different locations of the front line, and soldiers of the 1st and 7th regiments of the Armenian army fled.

Armenian forces launched Tockha-U missile strikes on the provinces of Goranboy, Tartar, Aghdam, Aghjabadi and Barda, and some Azerbaijani civilians were killed and wounded, he said.

“Azerbaijani army has no equipment problem. Our army has not taken even a step back from the regions it has liberated from the occupation since the day it launched a counter-attack,” he said, pointing to targets hit by the Azerbaijani army are legal targets in accordance with international rules.

“On the contrary, everything continues in accordance with the operation plan. Destination Karabakh. Victory is ours,” he added.