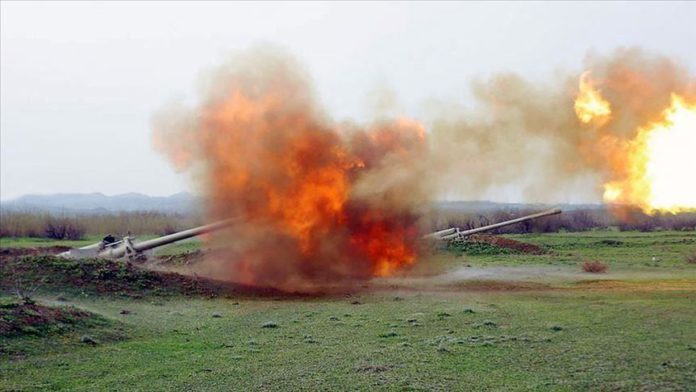 – The writer is the head of the Department of Azerbaijan State Customs Academy, also the chair of the Caucasian Center for International Relations and Strategic Studies, Baku.

The attack of the Armenian army with heavy weapons on the Tovuz Rayon of Azerbaijan suddenly changed the world agenda and caused the regional war scenarios to be brought to the agenda once again. It was announced that both sides suffered serious losses, especially in the mutual attacks that began at noon on July 12 and appeared to be weakened by July 15. For the first time, Azerbaijan lost a general in the hot conflict. The outposts belonging to Armenia, where attacks were carried out on the Azerbaijani side, were destroyed by the counter-fire of Azerbaijan. Ilham Aliyev, the president of Azerbaijan, convened the National Security Council, then the Council of Ministers, with a special agenda, one day apart, and gave important messages on the attacks of Armenia.

The harshest response to Armenia’s attacks came from Turkey. President Recep Tayyip Erdogan and Foreign Minister Mevlut Cavusoglu condemned the attacks of Armenia and urged the occupying state to respect the international law and leave the territory it has occupied. Remarks of Erdogan and Cavusoglu — that Turkey with all means will be with Azerbaijan in whatever way Baku chooses to save its territory — should be seen as statements that could change the regional balances.

Russia has invited the parties to abide by the cease-fire and said it can mediate between the parties if necessary. The US, Britain, and other Western countries have called on the parties for restraint. Pakistan strongly condemned the attacks of Armenia and expressed its support for Azerbaijan. Ukraine and Moldova called on the parties for moderation, urging for the implementation of UN Security Council decisions, numbered 822, 853, 874, and 884, to stop the Armenian occupation in the Azerbaijani territories for Azerbaijan’s territorial integrity. Furthermore, besides the implementation of the decisions mentioned above, Ukraine and Moldova said the problem should be solved under the fundamental principles of international law, and in particular, the territorial integrity principle. Also, due to this attitude of Ukraine, the Armenian Foreign Ministry summoned the Ukrainian ambassador in Yerevan to express discomfort.

In its first statement, Iran expressed regret over the losses and invited the sides to a cease-fire. But also, the foreign ministers of Azerbaijan and Iran in a phone call expressed their support for the territorial integrity of Azerbaijan.

The UN, EU, the Organization for Security and Co-operation in Europe (OSCE) and the NATO, as well as the Collective Security Treaty Organization (CSTO), with Armenia among its members, expressed their discomfort at the cease-fire violations and the start of the hot conflict. Contrary to Armenia’s expectation, the CSTO did not give it a clear support. The Organization of Islamic Cooperation (OIC) condemned Armenia for its attacks and supported Azerbaijan.

Differing views are being raised on the causes of the border clashes. In fact, for those who know in detail the history of the problem, especially the current situation, the cease-fire, and the subsequent “peace process”, this conflict was no surprise. As is known, Armenia, which was better prepared in the first phase of the war (having experienced cadres of the ASALA terrorist organization, as well as having very serious external support from a military, economic and diplomatic perspective), occupied about 20% of the Azerbaijani territory. The UN Security Council and other international organizations had adopted resolutions condemning the occupation and calling for an immediate and unconditional end to the occupation. However, Armenia did not follow these resolutions nor the cease-fire agreement signed in May 1994. Armenia believed that it would keep Azerbaijan under pressure with the possibility of a large-scale invasion and a new attack, and that it could prevent the attempts to liberate Azerbaijan’s territory with Russian military support. Nearly all important forces in the region that have interests and influence on the problem have tried to take advantage of the lack of resolution and negotiate with the parties over the occupation problem. For this reason, the problem of the occupation of the Azerbaijani territory by Armenia — shortly and commonly known as the Upper Karabakh problem — was described as a “frozen problem” like many problems in the former Soviet geography.

On the other hand, it was especially clear that after the intervention of Russia in Georgia in August 2008, the “frozen problems” were not actually frozen, and this was a great danger, and it was claimed that attempts to resolve the problem would intensify. In fact, the agreement signed at Mein Dorf Castle near Moscow on Nov. 2, 2008, with Russian mediation, was expected to significantly guarantee a cease-fire. Because for the first time, the parties said they would stick to peaceful methods in solving the problem with a document signed by Russia. But interestingly, the cease-fire violations, which have caused huge losses in recent years, happened at the time or immediately after talks were held between the sides.

For example, in June 2010, August 2014, November 2014, December 2015 and in other periods, whenever the high-level talks were at issue, cease-fire violations caused significant losses from both sides and made the war scenarios take part in the agenda. However, within a few days of each of these tensions, the previous order was restored. The most extensive clashes to date following the 1994 cease-fire agreement occurred in April 2016. Azerbaijan, which responded to the provocations of Armenia during those conflicts, saved part of its territory from the occupation of Armenia by inflicting great losses on the other side and took psychological advantage for the first time in the 30-year war. This seriously disturbed Armenia and its supporters.

Therefore, the fire never actually ceased after the 1994 cease-fire. The cease-fire violations are more likely to be the subject of the accusations from the opposing sides and an attempt to turn the balance in their favor in May 1994. As such, Azerbaijan was much stronger militarily, economically, and diplomatically than in the early 1990s. The figures also support this data.

For Azerbaijan, the fact that its territory (the former Nagorno-Karabakh Autonomous Region and the seven Rayons surrounding it) is under Armenian occupation is both against the international law and not in line with the existing military, diplomatic, economic, and other capacities of the two countries. In other words, Azerbaijan, at the time it deems appropriate, has signed Article 51 of the UN Convention. It has the right and capacity to liberate its territory from the occupation of Armenia within the framework of its right to self-defense based on its article.

Armenia considers this course too risky for itself and is trying to provoke Azerbaijan (as in the case of Georgia and Ukraine) to limit the growing capacity of Azerbaijan to a war involving Russia. This may be one of the main aims of the attack of Armenia this time from a different region on the border of the two countries.

The reasons for the cease-fire violations in general and the recent clashes in particular can be listed as follows: the opportunity for Armenia to eliminate the consequences of the April 2016 war and the psychological oppression, a reflection of the internal political struggle in Armenia, the purpose of the power to divert attention from social and economic problems, a reflection of the domestic military struggle, a reflection of the problems in foreign policy, seclusion of Azerbaijan into a large-scale war (in which Russia will take side with Armenia in terms of military), and making sure that its potential would receive a blow, etc.

The Upper Karabakh conflict is an important tool for Russia to continue its activity in the Caucasus. So Russia does not want it to be fully resolved, that is, the disappearance of an intermediary. Until recently, despite Russia, it was always seen as a poor prospect for a serious conflict to begin and for one of the sides to gain a serious upper hand over the other. The fact that Azerbaijan does not desire a war in which Russia will be involved at this stage, and that Russia does not wish to experience new problems because of Azerbaijan while it is dealing with so many problems, are the factors undermining the possibility of the growth of the conflict.

On the other hand, with the active involvement of Turkey in the process, the situation of “neither peace nor war” is beginning to become a source of risk for everyone, but especially for the occupying Armenia and the foreign powers that support this country militarily and hope for a solution. As it will be remembered, Cavusoglu, in his statement on June 20, had put forward a different perspective on the attitude of Turkey on this issue by saying that we would be on its side in the same way that Azerbaijan wants a solution to the Karabakh conflict. After the clashes, which began on July 12, this stance was emphasized more clearly and persistently at the level of President Erdogan and various ministers. Therefore, on the one hand, the balance between the military, diplomatic and economic opportunities of Azerbaijan and Armenia changed very much in favor of Azerbaijan compared to the beginning of the 1990s, on the other hand, Turkey’s active military policy and the official statements changed the balance.

The problem of the occupation of the Azerbaijani territory by Armenia was once an opportunity for the powers that had interests in the region and influence over the countries of the region, but it is now beginning to be a source of risk. As a result of this, the situation of “neither war nor peace” in terms of the Upper Karabakh conflict is no longer as healthy for the forces trying to profit from the lack of resolution of the problems in the South Caucasus. A large-scale war between Azerbaijan and Armenia, unlike the Syrian and Libyan problems, could further drain the possibilities of the major powers in the region (Russia, Turkey, and Iran), and these forces may have to lose important interests elsewhere. This scenario would be better suited to the interests of the major powers outside the region. Important powers in the region need to take these into account and act quickly on the solution of the Upper Karabakh conflict. This could speed up the solution process of the Upper Karabakh conflict.

* Translated by Merve Dastan in Ankara.