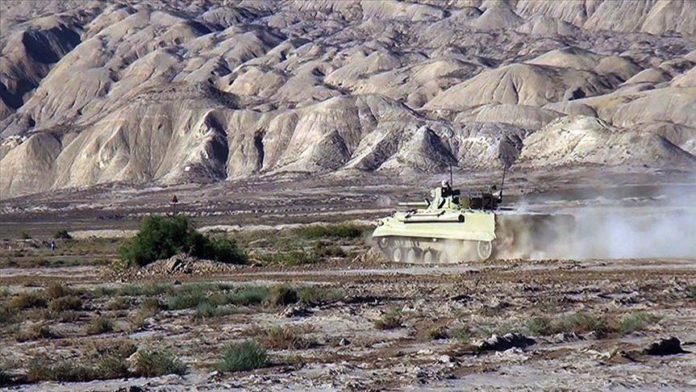 “During the night, the enemy fired at the vicinity of the city of Jabrayil, as well as the villages of this region liberated from occupation and located along the Araz River, using mortars and artillery,” the ministry said in a written statement.

The cease-fire — the second since hostilities around Upper Karabakh (Nagorno-Karabakh) began on Sept. 27 — only went into effect at 12 midnight Saturday (2000GMT),

Saying that there were no losses among military personnel, the ministry said that the Azerbaijan army units took “adequate retaliatory measures.”

“The Troops of the Azerbaijan Army are taking relevant actions at advantageous frontiers, important high grounds, and positions along the entire front,” it added.

The Armenian forces continued to make the situation tense during the night with mortars and artillery, the statement said.

“The enemy attempted to attack in the Aghdere, Fizuli, Hadrut, and Jabrayil directions on Oct. 18 at 07.00 am.,” it said, adding: “Units of the Azerbaijan Army are suppressing enemy attempts to attack.”

The ministry stressed that Armenia also attempted to “aggravate the situation” on the border with Azerbaijan.

“On Oct. 18, from 00:05 am [2005GMT Saturday] to 04:00 am [0000GMT Sunday] Armenian armed forces units stationed in the Chambarak and Berd regions of Armenia using large-caliber weapons fired at the positions of the Azerbaijan Army in Gadabay and Tovuz regions,” it said.

In a separate statement, the ministry said that until the announcement of the new humanitarian cease-fire, the operational situation on the frontline at Aghdere and Fizuli-Hadrut had been “relatively stable.”

The new cease-fire was taken in line with previous statements of the presidents of France, Russia, and the US – the co-chairs of the OSCE Minsk Group meant to resolve the conflict – Azerbaijan’s Foreign Ministry said in a written statement on Saturday.

Early Saturday, at least 13 civilians were killed, including four women and three minors, and nearly 50 others injured, when Armenian missiles once again struck Ganja, a city with a population of half a million.

The number of houses damaged in Armenian attacks has reached over 1,700, along with 90 residential buildings and 327 civil facilities, according to Azerbaijani officials.

Since clashes erupted between the two countries on Sept. 27 over Upper Karabakh (Nagorno-Karabakh) – Azerbaijani territory occupied by Armenia for nearly 30 years – Armenia has continued its attacks on civilians and Azerbaijani forces, even violating a humanitarian cease-fire that came into force last week.