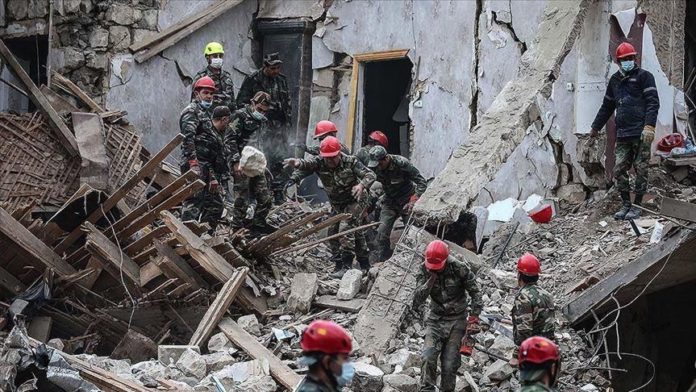 At least seven civilians have been killed, and 33 injured in an Armenian missile attack on Azerbaijan’s Ganja city, violating a temporary cease-fire on humanitarian grounds, according to the Azerbaijani Foreign Ministry on Sunday.

The ministry said in a Twitter statement that seven people were killed and 33 injured as a result of a missile attack that occurred at approximately 02:00 [local time] on October 11 [2200GMT October 10] in the city of Ganja, which is far off from the conflict zone.

The missiles launched by Armenia hit civilian settlements in Ganja city, according to the statement.

Earlier in the day, Azerbaijan’s Defense Ministry said Armenia is “grossly” violating the cease-fire agreement by trying to mount attacks.

The Azerbaijani army suppressed attempted attacks by Armenia throughout the night, said the country’s Defense Ministry in a statement on Sunday.

“The units of the Armenian armed forces, which did not comply with the humanitarian truce, have concentrated their forces and military equipment and again attempted to attack in small groups in the Hadrut and Jabrayil directions in order to regain their lost positions,” it noted.

It said the Azerbaijani military suppressed all enemy attacks by fire.

“The Armenian military command is in psychological stress, and the military personnel is under fear. The confidence of the Armenian soldiers in the commanders has been lost,” the ministry also said.

* Writing by Burak Dag in Ankara.