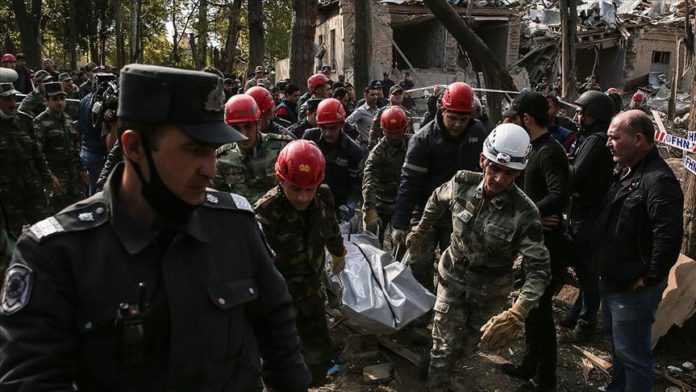 The death toll of an Armenian missile strike on Azerbaijan’s second-largest city of Ganja has reached 10, local authorities announced Monday.

Azerbaijan’s Chief Public Prosecutor’s Office said in a statement that one more civilian had succumbed to their wounds following the attack at around 2.00 a.m. local time on Sunday (2200GMT Saturday) that violated a tentative cease-fire between the two sides.

“We deeply regret to inform that on October 12th, one of the wounded, Aliyeva Gunay Zahid, born in 1992, died at the hospital where she was receiving treatment. At present, other wounded civilians are receiving in-patient treatment,” said the written statement.

Earlier on Sunday, the prosecutors announced that as a result of the Armenian army attack on Ganja — located outside the frontline — within 24 hours of the truce, at least nine people, including four women, were killed and 35 others injured.

Azerbaijani President Ilham Aliyev vowed a “befitting retaliation” against Armenia’s attacks, noting that the recent attack was a “war crime” and a “gross violation” of the Geneva Conventions.

A humanitarian truce had been declared on Saturday for the exchange of prisoners and retrieval of bodies in Upper Karabakh, or Nagorno-Karabakh, an internationally recognized territory of Azerbaijan.

The fresh clashes began on Sept. 27 when Armenian forces targeted civilian Azerbaijani settlements and military positions in the region, leading to casualties.