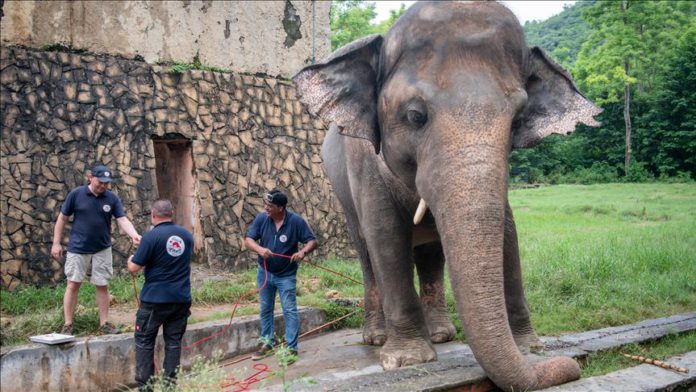 Pakistani authorities are mulling whether to transfer the only elephant in the capital Islamabad to an “appropriate sanctuary” abroad to save his life, following a court verdict. However, wildlife experts view the task as “very difficult”.

The Islamabad High Court in May ordered wildlife authorities to free and transport Kaavan the elephant, who has been lonely following the death of his partner Saheli, meaning friend, in 2012.

Gifted by the Sri Lankan government in 1985 as a calf only a year old, Kaavan became the subject of a high-profile rights campaign after it was revealed in 2015 that he was regularly being chained for several hours a day.

Pictures of Kaavan in shackles ignited a global outcry, that was also backed by American singer Cher, for his release to a sanctuary. Also, activists filed a petition in 2016, backed by over 200,000 across the globe.

Many described Kaavan as “Pakistan’s loneliest elephant” urging authorities to set him free and relocate him to a sanctuary amid his deteriorating health.

Wildlife officials cited Kaavan’s “increasingly violent” behavior, which was mainly due to the death of his mate, as the reason he was bound.

A four-member team of the US-based Progressive Animal Welfare Society (PAWS) — a group involved in wildlife rehabilitation — examined Kaavan on Friday to evaluate if he is fit to travel.

Yavor Gechev, a member of the visiting team, said on Friday that “all went fine” with Kaavan’s examination.

“The final results from the blood samples will be ready tomorrow, and based on the four PAWS experts, [we] will be able to make a statement on the condition of Kaavan,” Gechev told Anadolu Agency.

Anees-ur-Rehman, head of the state-run Wildlife Management Board, confirmed that Cambodia had been chosen as an appropriate sanctuary for Kaavan.

“Cambodia, Thailand, and Myanmar, which have sanctuaries for elephants, were under consideration to be Kaavan’s new home,” Rehman told Anadolu Agency.

After detailed consultations, he said the board decided to take Kaavan to a sanctuary in Cambodia, following the approval of the relocation project funded by wildlife groups.

Kaavan, he added, could not be sent back to his original home in Sri Lanka as there were no proper sanctuaries there for retired elephants.

However, Rehman acknowledged that relocating such a large and powerful animal would not be easy.

“Even if he is declared fit to fly, it’s very difficult to transport abroad such a powerful animal weighing four-five tons,” he said.

“The first and foremost requirement for that is his fitness. We have to assess if the elephant is fit for travel. He cannot simply be boarded to a plane and transported,” he underlined, adding that Kaavan needed to be trained to stay calm in a cage during the flight.

“If he becomes violent during the flight, it could be disastrous.”

In agreement, Rab Nawaz, the programs director for the Worldwide Fund for Nature (WWF) in Pakistan, said it would be entirely up to Kaavan to decide when he feels comfortable staying in his crate while being moved from Islamabad to Cambodia.

Rehabilitating him into his new home would be another challenge, according to Nawaz.

“He has been alone, chained and beaten. Like any living being with a high sense of intelligence, it may take time for him to adjust to new surroundings,” he explained, adding that though Kaavan was growing older, he appeared to be healthy, “so I hope that is going to go in his favor during the relocation.”

“But, of course, moving any animal any distance has a risk,” he maintained.

Nawaz noted that the best professionals would undertake the move and there would be no green-light until a complete assessment was complete. “I think the risk has been minimized.”

Nawaz asserted that relocation is the only viable option to save Kaavan, considering the conditions in Pakistan.

“There are no sanctuaries in Pakistan to retire Kaavan to. To build one especially for Kaavan would require a lot of land and a significant amount of resources, justifying this for one animal may not be possible,” he said,

Asian elephants can roam thousands of kilometers through deep tropical and subtropical forests, according to the WWF.

Other requirements, according to Nawaz, include, “expensive” elephant-proof fencing, along with veterinary services and maintenance.

“Elephants are social animals. It was observed that Kaavan’s health and behavior changed after the death of his mate. Importing an Asian elephant to Pakistan is not an option nor should it be considered. Hence, it is better to relocate [Kaavan] to a sanctuary where there are elephants of his own species,” he further said.

Finally, he added, Pakistan does not have any standards or laws on zoo management. “Until these are in place, keeping animals in zoos is always going to pose a risk to animals and whilst zoos have their importance to educate animals is there, it should not be at the cost of the animal’s well-being.”

Asked what would happen if Kaavan was declared unfit to fly, he said: “I don’t think it will be so black-and-white. Obviously, if they declare that he can’t travel at all, then that is going to be a huge disappointment to everyone that has worked tirelessly to move him to the sanctuary in Cambodia.”

“It may be that we’ll have to wait some time or perhaps adopt a different kind of transport. If there’s no way for him to leave Islamabad Zoo, then the managers would have to ensure that his remaining years are spent in the best possible care. But, given the circumstances […] that will be a challenge not only to his caretakers but also for Pakistan as a nation and how we value animals welfare.”