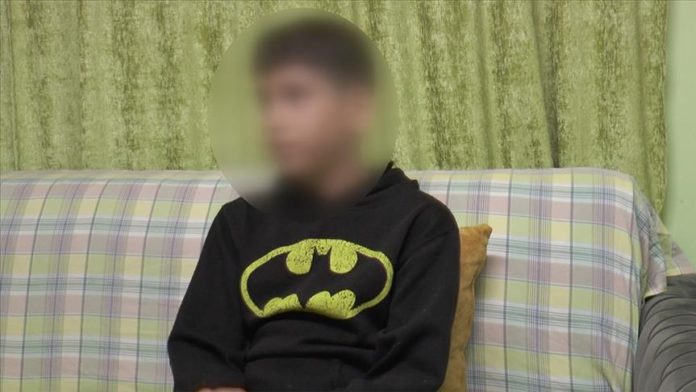 After being subjected to police violence in a raid targeting his home under the pretext of a “terror operation”, 12-year-old Mustafa A. has started therapy for sleep disorder.

The police using disproportionate force against people well-known to the public and treating them as terrorists led to reactions from various segments of the society. Many NGOs, journalists, and writers called for the issue to be urgently clarified.

Excessive use of power by the police caused serious mental disturbances among some family members who were subjected to the violence.

More than 10 children started receiving mental health treatment after the operations. Those 30 people who were detained and their families have also been facing financial difficulties for the last two months because their bank accounts were blocked.

Austria resident H.A.’s son Mustafa A., 12, spoke to Anadolu Agency of his experience during and after the operation.

Mustafa said he was sleeping next to his mother on the night of the raid when heard loud noises and someone shouting in an aggressive voice saying: “Nobody move, hands up!”.

He thought he was having a nightmare at first but noticed it was not one when he opened his eyes, and her mother jumped out of the bed and went to the other room.

Mustafa said he saw a man dressed in black and armed with long barreled gun while he was still trying to wake up.

He could not figure out that the man was a commando, Mustafa added, and that he thought that terrorists were trying to harm them after a terrorist attack left four dead and 22 others wounded in early November.

“The police said ‘the target was seen’ out of the walkie talkie in his hand, and then I said to myself ‘Am I the target?’ I still did not fully grasp the situation. Police was looking and searching around the room. I thought this time there was a terrorist hiding in our house, there was a terrorist under the bed, and I was even more scared,” said Mustafa, recalling the night.

“We stayed in the room for a few more minutes with the police pointing his gun at me. Then he noticed that I was scared and 12 years old. Although was terrified at that moment, I tried not to, and was silently saying ‘Bismillah’.”

“Then a female officer entered my room and told me not to be scared and that everything was fine. She said the commando is in the room for security purposes,” Mustafa added.

Mustafa said his mother went to check on his older brother who had asthma, as she was afraid he might get an asthma attack.

He said there was about 20 police officers in their home. While he and his mother were staying in the same room, his brothers were in a different one.

“In the meantime, I saw my father moving toward the wardrobe with two or three policemen pointing their guns to him, with his hands up and then he changed his clothes there,” he said.

After his father left with the police, his brothers reunited with them in the same room, said Mustafa, adding they were not allowed to speak Arabic and if they spoke they were threatened to be separated again.

Mustafa said the police searched every corner of their home, examined the phones of all family members, and confiscated all electronic devices belonging to his father.

The door of their home was broken and left open, so their neighbors witnessed all that happened, he also said.

“After the operation, I suffered from sleep disorder. All that happened is still before my eyes, and I can still hear the shouting and the voices. They were scattered all over our home. It wasn’t possible to get rid of the dirt and mess in the house even in two or three days.

“We didn’t know why all this happened, what the cause was. This was getting on our nerves. Why did they not ring the bell? It was nonsense,” added Mustafa.

I was biting my lip out of fear

Mustafa said he had to talk to a psychologist because of all he experienced.

“I had to go to a psychologist three times. The psychologist taught me some methods to help me forget or overcome what I went through. Even if these methods are useful and the best methods, I still cannot forget what I experienced,” he said.

He added that he could not go back to normal for a long while.

“When our upstairs neighbors walk a bit louder, I instantly go back to those moments. When I hear the alarm clock, I suddenly remember the same moments and bite my lips out of fear.”

Over 70% of nations have COVID-19 response plan: WHO

US weekly jobless claims rise to 1.4M amid virus surge